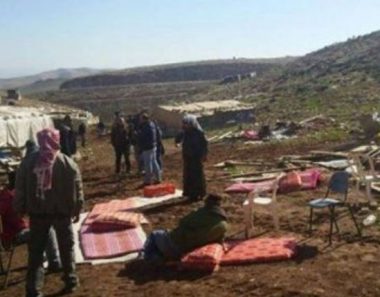 Israeli soldiers abducted, on Saturday afternoon, ten Palestinians, including two journalists, during an activity in support of residents who received illegal annexation orders of their lands, in the al-Hamra area near Bani Neim town, east of the southern West Bank city of Hebron.

The activity was organized by the Popular Committee against the Annexation Wall, and Bani Neim Local Council.

The Popular Committee said the soldiers invaded the lands, and assaulted the nonviolent protesters, before abducting ten of them, including two journalists.

The Israeli army declared the entire area a “closed military zone,” and forcibly removed the protesters.

It is worth mentioning that Israel is trying to confiscate 20 dunams, owned by members of D’eis Palestinian family in the al-Hamra area, in order to build a new illegal colony, especially after colonialist settlers installed, last week, a tent, a mobile home and a barn.