Child, Who Was Abducted By 23 Israeli Soldiers, Reveals Assaults And Torture 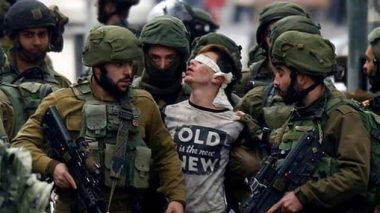 A lawyer with the Palestinian Prisoners’ Society managed to visit a Palestinian child, who was assaulted and abducted by 23 Israeli soldiers on December 7th, and informed him of horrific violations, abuse and torture.

The lawyer managed to visit Fawzi Mohammad al-Juneidi, 16, who is held in Ofer Israeli prison and military base, near Ramallah.

The child said that prior to his abduction, a soldier started beating him on the chest, using his weapon in striking him, after stopping him while walking in an area close to where clashes were taking place when the soldiers resorted to excessive forces against Palestinian protesters.

The child was walking to his relatives’ home in the Tuffah Street area, in Hebron, in the southern part of the occupied West Bank.

The soldiers then cuffed him with plastic cuffs that caused bruises and lacerations in his skin, and blindfolded him, before taking him away, after he lost his shoes, and again, started kicking and beating him, while hurling insults.

The child stated that he asked the soldiers to bring him his shoe, but they removed his other shoe instead and forced him to walk barefooted.

He was later placed in a dark room, while some soldiers poured cold water on his feet before repeatedly stomping on them.

The soldiers continuously beat and clubbed the child, causing cuts and bruises to various parts of his body, and tried to send him to Etzion military base, north of Hebron, but the administration there refused to receive him due to his serious injuries.

He was moved to an Israeli hospital, and was later transferred to Ofer prison.

The child was subject to harsh interrogation in Ofer, while chained and cuffed, and neither his lawyer, nor any member of his family, could attend the interrogation.

One of the interrogators forced him to sign a statement, written in Hebrew without any interpretation or translation.