Thousands March in Funeral for Palestinian Amputee Killed in Gaza 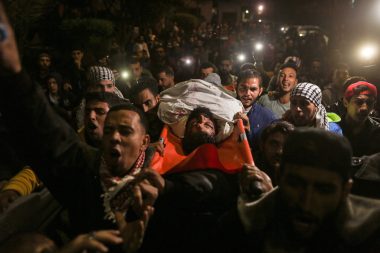 Thousands of Palestinians in the besieged Gaza Strip marched on Saturday, in the funeral of slain Palestinian Ibrahim Abu Thuraya, 29, who was shot in the head and killed by Israeli forces on Friday, during clashes along the border with Israel.

Abu Thuraya was a well-known Palestinian activist, famously recognized for consistently protesting the Israeli occupation, despite losing both his legs in an Israeli airstrike, in 2008. After he was disabled, Abu Thuraya worked washing cars in Gaza to support hi 11-member family.s

According to tributes to Abu Thuraya popped up across social media after his death, as Palestinians widely circulated a video of him calling on everyone to protest against US President Donald Trump’s recognition of Jerusalem as the capital of Israel, just days before he was killed.

Following his funeral on Saturday, Abu Thuraya’s mother said that he “had always been brave facing the occupation, even after he lost both of his legs, he would go raise the Palestinian flag on the borders.”

Abu Thuraya was one of for Palestinians — two from the West Bank and two from Gaza — who were shot dead by Israeli forces on Friday during clashes over Trump’s decision.

Palestinians have vowed to continue protesting Trump’s unprecedented decision, which Palestinian and Arab leaders warned would cause instability and unrest in the region.

Trump’s announcement was the first step to a drastic abdication of longstanding US policy that has largely adhered to international standards on Israel-Palestine, which maintains that East Jerusalem is an intricate part of occupied Palestinian territory and the capital of any future Palestinian state, despite Israel’s annexation of the territory.