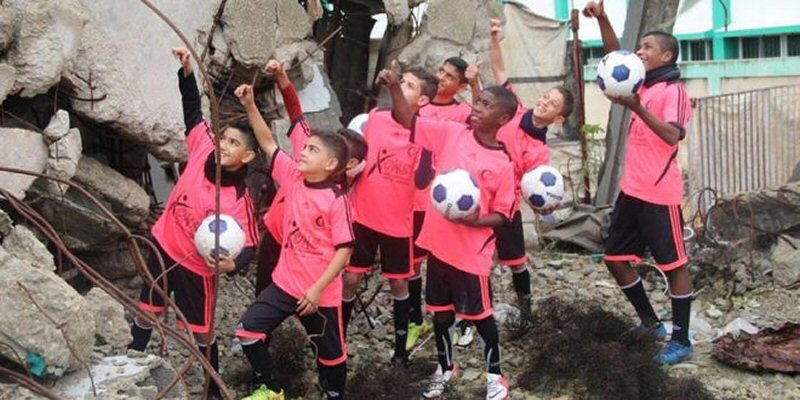 After they played and charmed their way into the hearts of communities across Ireland last summer, a mostly new group of 19 children from Al Helal Football Academy in Gaza City, Palestine, is due in Ireland tomorrow .

“As the trip was such an uplifting, joyous experience, we are doing it all again this year,” Gaza Action Ireland (GAI) coordinator Zoë Lawlor said.

The Gaza Kids to Ireland project is a way to show solidarity with the people of Gaza and to raise awareness in Ireland about the siege of Gaza and the broader situation in Palestine. Last year, a smaller group of children met President Michael D. Higgins and attracted a large amount of media attention, including from RTÉ television news.

Starting this weekend, the children, aged 10 to 14 years, will visit and play matches in Dublin, Leitrim, Galway, Cork and Limerick. In a hectic schedule of football, fun and travel, they’ll make a repeat visit to Kinvara, Co Galway, and make new friends in Manorhamilton, Co Leitrim.

Launched by former manager of the Republic of Ireland Brian Kerr and former Irish rugby international Trevor Hogan, the project aims to give the kids some relief from the stress of living under blockade and military assault.

The situation for Palestinians in Gaza trying to play sports, living as they do under siege, is extremely difficult. The children are hampered by lack of facilities, equipment and places to play: indeed their clubhouse was damaged by Israeli bombing in 2014.

Travel is sharply restricted for Palestinians in Gaza: few of the children have ever been able to leave the tiny strip of territory. This visit to Ireland will provide a wonderful chance for them to meet other children, experience a new culture and tell their stories.

The almost 2 million people in Gaza are under an illegal blockade imposed by Israel, and these children have already lived through three wars on the besieged territory.

The 19 players and three adults will be in Ireland until August 6th. Fundraising events are being held all over the country and donations are both welcome and needed!