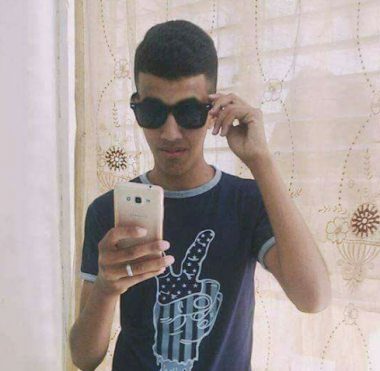 Israeli military shot, Friday, 16-year old Abdul-Rahman Hussein Abu Hamisha,  during a protest against the ongoing Israeli assault on the al-Aqsa Mosque in Jerusalem, and the deadly and inhumane conditions of the Israeli siege of Gaza.

The Ministry of Health in Gaza said Abu Hamisha was participating in a protestm east of al-Boreij refugee camp in central Gaza, when Israeli troops, stationed across the border fence, opened fire on the protesters, killing him, and wounding at least ten others.

The injured were all said to have received bullet wounds from live ammunition fired by the Israeli soldiers. Some were injured in the al-Boreij protest, while others were shot during protest marches in Jabalia refugee camp, in the northern part of the Gaza Strip.

At least one was wounded in the Farahin area of Khan Younis, in the southern part of the Gaza Strip. The killed and injured from al-Boreij camp were taken to the Al-Aqsa Hospital in Dir al-Balah.

In addition to firing live ammunition into the crowd, Israeli forces also fired tear gas, according to local sources. Two Palestinian medics were among those who had to be hospitalized for tear gas inhalation.

In the other protests that took place in Gaza Friday, in “Nahal Oz”, east of Gaza City, a young man was shot in the foot and was taken to Shifa hospital west of the city to receive treatment, while others suffered from tear gas inhalation.

The soldiers fired on the crowd when the protesters got too close to the Annexation Wall constructed east of the city.

In the Khan Younis protest, the Israeli soldiers fired live bullets and tear gas, injuring at least two youths with live bullets in the feet. The two children were evacuated to Nasser Hospital in the city of Khan Younis, and their condition is moderate.

There were also violent confrontations between youth and the Israeli military near the Beit Hanoun crossing “Erez” in the northern Gaza Strip, during which the Israeli soldiers fired live bullets and tear gas at the crowd. No injuries were reported in Beit Hanoun

Abu Hamisha was the second Palestinian to be killed by Israeli forces on Friday. The first was Abdullah Mahmoud Taqatqa, 24, who was shot near Gush Etzion settlement junction, south of Bethlehem, in the West Bank, after the army claimed he ran toward the while wielding a knife.

An eyewitness denied the military allegation, and said the Palestinian was at least twenty meters away from the nearest soldier.