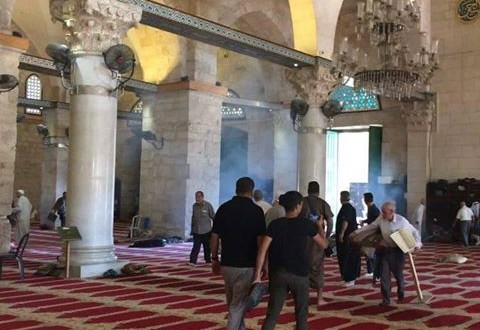 Twelve Palestinians were injured with rubber-coated metal bullets and teargas during clashes that broke out, between devotees at Al-Aqsa Mosque and Israeli soldiers, on Sunday at dawn.

Locals who were at the mosque said, according to the PNN, that Israeli forces broke into the mosque releasing teargas and sound bombs on the people, then violently detained one Palestinian and severely assaulted another.

He added that, for the first time, the Magharba gate was opened again for the settlers, which is a first during the last ten days of the holy month of Ramadan.

Al-Aqsa Mosque is frequently subjected to raids by extremist settlers, under the protection of Israeli police, causing anger amongst Palestinians over the historic and Islamic status of the mosque.

Since the start of Ramadan, Israel has revoked the permits to enter Jerusalem for 83,000 Palestinians, due to the Tel Aviv shooting in which four Israelis were killed.

Instead, Palestinian men over 45 years, women were allowed to attend the mosque only on Fridays, and with hourly restrictions.