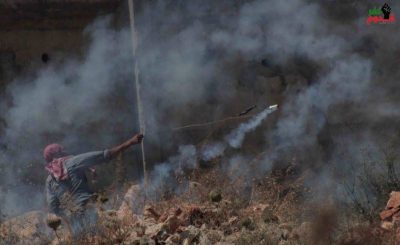 Israeli soldiers invaded, Friday, Kufur Qaddoum town, east of the northern West Bank city of Qalqilia, and attacked the weekly protest against the Annexation Wall and colonies, leading to clashes.

Morad Eshteiwy, the media coordinator of the Popular Committee against the Wall and Colonies in Kufur Qaddoum, said dozens of soldiers invaded the town, and fired a barrage of gas bombs, concussion grenades and rubber-coated steel bullets.

Local youths burnt tires, to obstruct the invading army vehicles, and hurled stones at the soldiers. There have been no reports of injuries, while some Palestinians suffered the effects of teargas inhalation.

Today’s protest also comes to mark the fiftieth anniversary of the Palestinian Naksa, when Israeli occupied the rest of Palestine in 1967 – the West Bank, including East Jerusalem, and the Gaza Strip.

It was held by dozens of locals, in addition to several Israeli and international peace activists, who marched chanting for ending the illegal Israeli occupation of Palestine.

The protesters also demanded the army to reopen the main town’s road, which was blockaded fourteen years ago to enable easy access to the illegal colonist Israeli settlers, driving to and from Kedumim colony, built on privately-owned Palestinian lands.