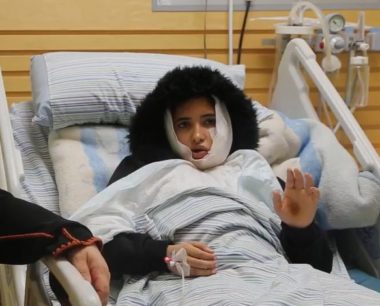 This item is about a female university student, studying Information Technology in Palestine Technical University – Kadoorie, in Tulkarem in northern West Bank.

An Israeli soldier shot her in the college campus with a high-velocity gas bomb which struck her face, fracturing her jaw, and causing burns to her face and hand. The gas bomb also left a large rupture in her cheek.

She was shot after the soldiers engaged in an excessive force against students holding a nonviolent procession in solidarity with Palestinian photojournalist Moath Amarneh , who lost his left eye after being seriously injured by a rubber-coated steel bullet, fired by an Israeli soldier.

Amarneh was covering a protest against land confiscation, in the Surif region of the Hebron governorate. He was rushed to the hospital in Hebron for emergency treatment.

After being shot by the gas bomb in her face, Nagham reacted by removing the bomb which had stuck to her face, causing various wounds, including penetrating and burning the skin, creating a large cheek wound, in addition to causing upper and lower jaw fractures and burns.

Her mother narrates the incident that led to her injury, and the damage the Israeli gas bomb caused to her face, jaw and hand.

I just arrived home, and I got a call telling me my daughter Nagham “fell in the university,”

I told them it seems there are some incidents in her college, was she injured?

Her colleague told me “yes auntie, she was shot with a gas bomb.”

The soldiers came from the area behind the university, her colleagues were waiting for her in front of the library, she was only ten meters away from the soldier who fired the gas bomb at her.

Another student who witnessed the shooting said that the gas bomb (after striking her in the face) was literally stuck on her hand, after it had lodged in her jaw, and she tried to remove it.

He said that he managed to remove the gas bomb from her hand, and added that she wasn’t very coherent after that, due to the injury.

The mother stated that her daughter wears eyeglasses, which apparently protected her eyes, before they flew away from the force of the bomb.

The mother reported, “I rushed to the emergency room at Thabet Thabet Governmental Hospital, in Tulkarem, and found her bleeding, they gave her the needed treatment, but the hospital does not have surgeons specialized in facial or jaw surgeries, so she was moved to the Istishari Hospital, in Ramallah.”

They instantly started treatment, especially for the gas bomb which struck her face and jaw; she has a burn in her hand, and two fractures in her jaw.