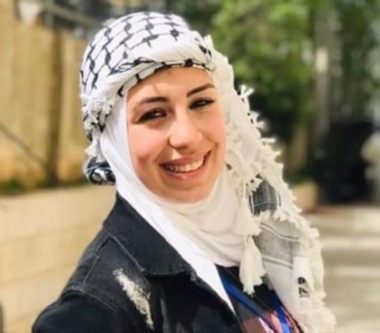 Israeli soldiers abducted, earlier Thursday, at least eight Palestinians, including a young woman and the Governor of occupied Jerusalem, from several parts of the occupied West Bank, the Palestinian Prisoners’ Society (PPS) has confirmed.

The PPS office in Hebron, in southern West Bank, said several army jeeps invaded Beit Ummar town, north of the city, and ransacked a home before abducting a young woman, who is in her fourth year at Palestine Polytechnic University.

The young woman, identified as Leen Akef Awad, 23, is also an elected member of the Students’ Council at her college.

Her father said the soldiers violently searched the home, and confiscated a Laptop, a computer, mobile phones and even a landline phone owned by the family.

He added that the soldiers took his abducted daughter to Etzion military base, north of Hebron.

The soldiers also invaded Shiokh town, east of Hebron, and abducted Yousef Warasna, after storming and ransacking his home.

In occupied Jerusalem, the soldiers invaded Silwan town, south of the Al-Aqsa Mosque, and abducted Yousef Ashour, 17, after invading and violently searching his family’s home in Batn al-Hawa neighborhood.

The governor has been abducted and detained more than thirteen times since he took office, and was banned from entering all other areas in the West Bank for twelve months.

Also in Jerusalem, the soldiers abducted the Director of the Education Ministry Samir Jibreel, and Ziad Shamali, who heads the Parents’ Council of Jerusalem Students.

In Bethlehem, south of occupied Jerusalem, the soldiers invaded and searched homes in the Deheishe refugee camp, south of the city, before abducting two Palestinians identified as Odai Adnan Shehada, 23, and Khalil Mohammad al-Banna, 24.

In related news, the soldiers invaded Aseera al-Qibliyya town, south of the northern West Bank city of Nablus, and confiscated a bulldozer, owned by Ali Issa Makhlouf, from his own land.