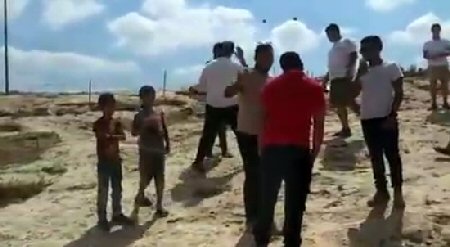 Israeli settlers continued to storm the Palestinian village of Susiya, for the third day in a row, in the southern occupied West Bank district of Hebron, on Sunday.

According to local Ma’an sources, dozens of Israeli settlers, under the armed security by Israeli forces, stormed the Susiya village for the third day this week.

The settlers reportedly performed Talmudic rituals in the area, and several of them were reported to have verbally assaulted the Palestinian residents of the village.

While in the village, Israeli settlers were also calling for the displacement of Palestinian residents from their lands.

Settlers regularly storm Palestinian areas in the occupied West Bank, to carry out such rituals under the protection of the Israeli army.

Visits by Israeli Jews to areas under Palestinian control across the West Bank often cause tensions with locals, as these visits are accompanied by large armed escorts.