Colonialist Settlers Injure A Father And His Child, In Hebron 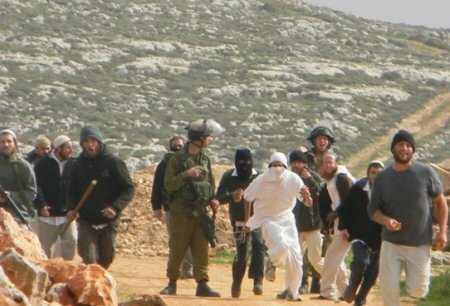 A group of armed illegal Israeli colonialist settlers injured, on Friday evening, a Palestinian man and his child, east of Hebron city, in the southern part of the occupied West Bank.

Media sources in Hebron said the illegal colonists came from Keryat Arba’ colony, which was built on Palestinian lands, east of Hebron.

They added that the colonists attacked many homes in Wad al-Hasseen area, and hurled stones at them, wounding Hisham Jamil Abu Es’eifan, 48, and hic child, Mohammad, 10.

Local medics rushed to the home of the wounded father and his child and provided them with the needed treatment without the need to move them to a hospital.

In related news, the soldiers abducted a former political prisoner, identified as Mohammad Ahmad Bani Odah, from Tammoun town south of Tubas, in northwestern West Bank, after stopping him at Za’tara military roadblock, south of the northern West Bank city of Nablus, while he was heading back home.