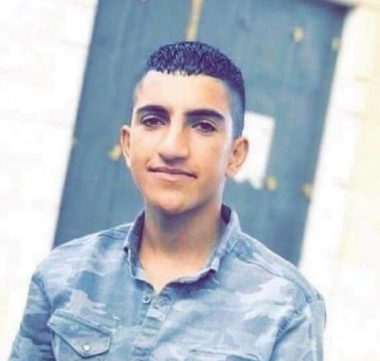 Israeli soldiers killed, on Friday evening, a Palestinian teen, only 16 years of age, from Silwad town, east of the central West Bank city of Ramallah, and wounded another Palestinian, in addition to moderately injuring a young man in ar-Reesan Mountain area, west of Ramallah.

Palestinian medical sources said a soldier, stationed in a fortified military tower, shot Ayman Ahmad Othman Hamed, 17, from Silwan town, with a live round in his chest.

The soldier was in the fortified military tower, which was installed by the army near Ein Yabrud nearby village.

After shooting the Palestinian, several soldiers surrounded him, and later allowed Red Crescent medics to approach him. His corpse was then moved to Palestine Medical Complex in Ramallah.

The soldiers also shot young man with a live round in his arm, before he was rushed to a hospital.

In related news, the soldiers attacked dozens of nonviolent Palestinian protesters in ar-Reesan Mountain, which belongs to the villages of Ras Karkar, Kafr Ni’ma and Kharbatha Bani Harith, west of Ramallah.

Medical sources said the soldiers shot a young man with a rubber-coated steel bullet in the head, causing a fracture in his skull and brain hemorrhage. His condition was described as moderate; Several Palestinians suffered the effects of teargas inhalation.

The Palestinians have been holding ongoing weekly protests in ar-Reesan Mountain since Israel decided to illegally annex it for the construction and expansion of its colonies.