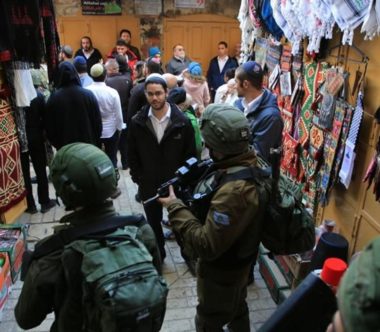 Dozens of illegal Israeli colonialist settlers carried out, on Saturday evening, a provocative march in the streets and alleys of the Old City of Hebron, in the southern part of the occupied West Bank.

Media sources said the colonists marched through the market area, and headed to the street of the City Council then to the Shuhada Street.

Israeli soldiers closed the entire area to the Palestinians, and prevented them from entering or leaving it.

In related news, the soldiers assaulted Mashhour al-Wahwah, a cameraman working of the Palestinian News & Info Agency (WAFA), while documenting the march.

On Saturday morning, the soldiers abducted the secretary of Fateh Movement in occupied Jerusalem, and the head of the Palestinian Prisoners’ Society’s (PPS) office in the city, Nasser Qous.