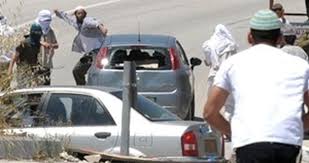 Ghassan Daghlas, chief for the anti-settlement Palestinian profile in the West Bank, told local media outlets that the armed illegal settlers infiltrated from the nearby Israeli colony of Houmash, south of Jenin city, and began attacking Palestinian vehicles.

Daghlas said that no causalities were reported, but some there were damages to some vehicles.

He also noted that, a few days ago, a group of Israeli settlers assembled a caravan on the land from the Houmash illegal Israeli settlement that was evacuated some time ago by orders of the Israeli military authorities.

Noteworthy, attacks on Palestinian-owned property, including homes, agricultural facilities and vehicles, have increased over the past several weeks, with the Israeli military, the majority of the time being present while powerless, Palestinian media sources have reported.

Colonist Israeli settlements, across the West Bank, have been erected by the hundreds, since the Israeli occupation of the West Bank, back in 1967. According to United Nations Security Council’s resolution 242 of 1967, Israel must withdraw immediately from the West Bank.