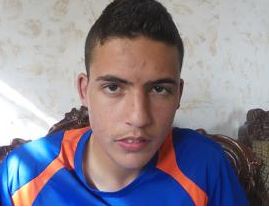 Defense for Child International – Palestine Branch has reported that Israeli soldiers are systematically abusing Palestinian children, especially during invasions of their homes and while abducting them.

DCI said it documented many cases of abuse targeting Palestinian children after the soldiers stormed their families’ homes without any cause or justification, for both the invasions and the excessive use of force.

One of the cases is that of Ahmad Tamimi, 16, from Betunia town west of Ramallah, who was repeatedly beaten and assaulted by the soldiers after they invaded his family’s home to kidnap his uncle.

In a sworn affidavit, Tamimi told DCI that, on March 17, he was awakened by the very loud noise, shortly after midnight, to find eight Israeli soldiers surrounding his bed, in his own bedroom.

“For the first few seconds, I thought I was dreaming, but reality started sinking in when a soldier stared violently pulling me out of my bed, to drop me on the ground,” Tamimi said, “The soldiers then started kicking and beating me, and hitting me with their weapons while shouting in Hebrew. I started screaming and calling for my dad, while also trying to fend for myself, using my arms in an attempt to block their kicks and punches.”

“They tied my arms behind my back using plastic cuffs, and ordered to me to stand up and walk with them,” the child added, “I said I was unable to do so, and that is when one of the soldiers pulled me from my hair to force me to stand, then two soldiers grabbed me and forced me out of the room.”

The child also stated that one of the soldiers hit him with his rifle on his left cheek; he started feeling dizzy when the soldiers dragged him bedroom’s door, and started suffering severe pain.

After invading the home, the soldiers held the entire family in one room, and later moved Ahmad to the same room while handcuffed and his legs shackled, then they left the property after abducting his uncle, 30 years of age.

The family then untied their child and directly headed to the Palestine Medical Center in Ramallah; after examination, the doctors found various cuts and bruises to his head, forehead, left shoulder and right arm.

Since that incident took place, Tamimi has been afraid to sleep in his room alone, and constantly feels that the soldiers will surround and attack him again. He is always thinking about what they did to him, and is terrified of leaving home after dark.

On March 3, at least fifteen Israeli soldiers invaded, approximately at 3 at dawn, a home in the northern West Bank city of Jenin after smashing the front door.

The soldiers the grabbed Ahmad ‘Arqawi, 17, and his brother, 21, and started repeatedly pushing their striking against the walls.

“A soldier asked me about my name, I said Ahmad,” he said, “The soldier then slammed my head against the wall. I was in severe pain, and the soldiers forced my eight family members in the bathroom.”

“The soldiers dragged me out of my bedroom, tied my hand behind my back using plastic cuffs, and I could hear sounds of furniture being broken and destroyed by other soldiers searching our home,” he added, “Then three soldiers started kicking and punching me, and hitting me with their rifles, mainly on my head, chest and back. I started feeling dizzy, but they continued to shout and scream at me in Hebrew.”

One of the soldiers also pushed Ahmad’s head against every mirror in the bedroom, causing various cuts, especially on the right side of his head in addition to severe pain.

“They dragged me out of my bedroom to the living room, there; I saw many masked soldiers, and one of them forced me against the wall while strangling me,” the child added, “Another soldier brought a cup filled with water, and started pouring it in my mouth while the second soldier continued to strangle me while punching me with his other hand.”

The soldiers later dragged the child to the bathroom, where his family was held, and told him “look how your family members are screaming and crying, look at what we did to your family and your home – we wrecked it!”

They then forced him into the bathroom, with his family, and kidnapped his brother while repeatedly kicking, punching and beating him.

After the soldiers left the family home, and withdrew, the family called for an ambulance that took Ahmad to the Jenin governmental hospital, where he was treated for serious cuts and bruises in various parts of his body, including his head, face, shoulders and back.