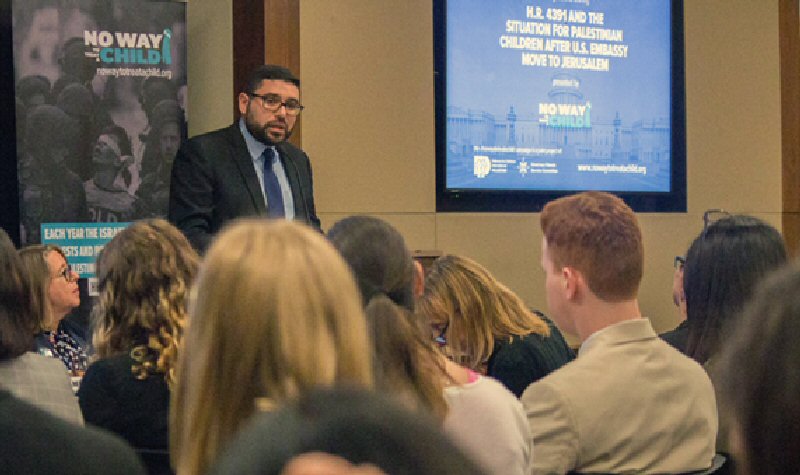 Staff from at least 58 congressional offices joined Defense for Children International – Palestine (DCIP) on June 25 in Washington for a congressional briefing on H.R. 4391 and the situation of Palestinian children’s rights under Israeli military occupation.

“None however have ever delivered on the promise,” Shamas told the crowded room. “Each successive administration, as they entered the White House and familiarize themselves with the international legal regime around Jerusalem and the many complicated legal and political implications of the move, pulled back from this promise until this administration.”

Bill Van Esveld, a senior researcher for Middle East and North Africa in the Children’s Rights Division at Human Rights Watch, focused on Palestinian children’s access to education and how it is undermined by Israeli authorities in the way that land is allocated for settlement construction. Van Esveld highlighted how a Palestinian school in the West Bank village of Khan al-Ahmar faces demolition at any time by Israeli forces.

Brad Parker, international advocacy officer and attorney at DCIP, provided updates on the situation of Palestinian children detained in the Israeli military detention system noting that “3 out of 4 Palestinian children continue to experience physical violence following arrest by Israeli forces.” Parker went on to provide an overview of H.R. 4391.

Jehad Abusalim, policy consultant at American Friends Service Committee, focused his comments on the human rights and humanitarian situation of Palestinian children living in Gaza, noting “for children who are halfway through their childhood, they have known nothing but blockade, war, and regular incursions by Israeli forces.”

The briefing also featured remarks from Dr. James Zogby, founder and president of the Arab American Institute, who highlighted the significant shift that has occurred in Washington concerning recognition of and advocacy for Palestinian rights.

The briefing was sponsored by DCIP and the American Friends Service Committee as part of the No Way to Treat a Child campaign, which seeks to expose widespread and systematic ill-treatment of Palestinian children in the Israeli military detention system.

H.R. 4391 seeks to promote justice, equality, and human rights. It prohibits U.S. tax dollars from supporting human rights violations like torture and ill-treatment against Palestinian children during the course of Israeli military detention. As of June 29, H.R. 4391 had amassed 29 cosponsors.

Previous congressional advocacy efforts as part of the No Way to Treat a Child campaign, include a June 2016 letter signed by 20 members of Congress to President Barack Obama urging the appointment of a Special Envoy for Palestinian Children, and a 2015 letter signed by 19 members of Congress to U.S. Secretary of State John Kerry urging him to prioritize the issue of Palestinian children in Israeli military detention.

DCIP and AFSC launched the No Way to Treat a Child campaign with a congressional briefing on Capitol Hill in June 2015, featuring remarks from Rep. Keith Ellison (D-MN) and testimonies from former child prisoners.

The No Way to Treat a Child campaign seeks to challenge and end Israel’s military occupation of Palestinians by exposing widespread and systematic ill-treatment of Palestinian children in the Israeli military detention system. It is a joint project of Defense for Children International – Palestine and American Friends Service Committee.