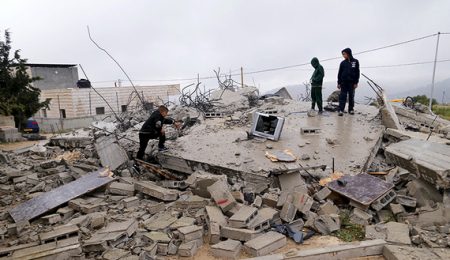 On Thursday August 3rd Israeli Authorities issued thirteen military demolition orders for Palestinian properties in the village of al-Walaja, in the western part of the Bethlehem district. The orders target nine houses and four residential buildings, all of which are located on the Ayen Al jewaiza site, which Israel illegally annexed to the Jerusalem municipality in the 1980s while its Palestinian residents remained West Bank residents. Similar policies were also implemented elsewhere, such as in ‘Al Khas’ and ‘Al Noaman’, located to the East and South of Bethlehem respectively.

Due to the fact that Israel has considered this land as part of the Jerusalem Municipality while maintaining the status of the residents as West-Bankers, those who live in these areas cannot not get permits, which leads to very low development despite continuing population growth. By restricting their freedom of movement, these developments have affected – and continue to affect – every aspect of Palestinians’ lives, economically, socially and educationally.

al-Walaja has faced dozens of house demolitions in the past decades. The current orders could leave hundreds of residents homeless and lead to the confiscation of more land. According to Israeli plans for the area, the separation wall will continue to be built there, in addition to many more settlement projects.

Additionally, on Thursday the Israeli Authority finished constructing more of the separation wall in the Hebron district, starting from the town of Tarkomia in the west and stretching 42km to Yatta, south of Hebron. The separation wall has separated thousands of agricultural dunams and cut off access to important economic resources, primarily olive trees. Moreover, further construction is planned, and will lead to yet more detrimental limitations to the development of many villages and towns, such as Al Dahiriyya’ and Al Ramadeen.