How the Blockade Hurts Children (VIDEO) 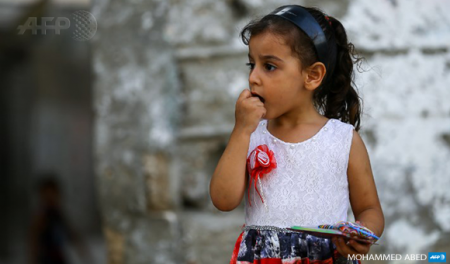 It’s been ten years since Israel began its land, sea, and air blockade on the Gaza Strip. This military siege has largely cut Gaza off from the rest of the world and prevented or acutely limited a wide range of goods and services from reaching children in Gaza.

(Photo: A Palestinian girl plays outside her house in Gaza City on July 27, 2017. AFP / Mohammed Abed)

As the siege grinds on, a man-made humanitarian crisis faces the 2 million Palestinians living in Gaza, 43 percent of whom are children under the age of 15.

Repeated Israeli military assaults over the last ten years have worsened the situation. Since 2007, Defense for Children International – Palestine has documented 1,031 child fatalities due to Israeli military incursions, border violence, and explosive remnants of war (ERW).

Without adequate food, health care, education, or safe spaces, Gaza’s children are growing up without a childhood.

Israel limited or prohibited each of these staple foods, at some point, from entering Gaza over the last decade. Further exacerbating food shortages, Israel has restricted Palestinian access to up to 85 percent of Gaza’s fishing waters and 35 percent of its agricultural land, including a strip of Palestinian territory along the Gaza-Israel border that Israel unilaterally declared a “no-go or “buffer” zone.

Poverty and food scarcity have forced many children to seek food or income in dangerous ways, including entering the “buffer” zone. The exact range of the buffer zone remains unclear. Children who use the land to graze animals or scavenge for scrap metal to sell, often only know they have strayed into the buffer zone when Israeli soldiers begin firing at them.

Fadel O., 11, was injured in the buffer zone while trying to meet his older brother, Nedal, to help bring home the family’s grazing sheep. Before reaching his brother, Israeli forces shot him in the thigh and groin. The soldiers left him bleeding on the ground for three hours.

“I placed my right hand on my eyes to close them and waited for death to come and get me,” Fadel said. He was discovered by relatives who rushed him to the hospital. Surgery saved his life but probably cost him the ability to have children, according to doctors.

With the blockade restricting “dual-use” materials, reconstruction has been slow. Three years on, around 40,000 individuals are internally displaced, many of whom are living in emergency shelters not intended for long-term use.

Displaced Gazan children are exposed to nearly every kind of human rights risk including poor water and sanitation conditions, illness, weather-related risks, psychological distress, and in some cases, death.

Ahmad J., 10, fled his home in Khuza’a, near the southern border town of Khan Younis, with his family after the Israeli army invaded the area, taking shelter in a UN Relief and Works Agency (UNRWA) school. When they returned home, they found only rubble. Their home and neighborhood had been razed to the ground. Ahmad and his family were told aid trailers would be imported, but Israeli authorities banned their entry and the family was forced to move into a trailer manufactured inside Gaza using substandard materials.

When winter rains began, the floor collapsed and the trailer was flooded by sewage. “The floor split into two halves, and the furniture and clothes were soaked in sewage water,” Ahmad told DCIP. “And because it was really cold, we froze under the blankets. Especially when electricity was cut off almost the entire day.” Conditions were equally difficult for the family in summer, as the tin walls of the trailer conducted heat, turning the inside of the trailer into an oven.

Outside spaces are also often unsafe. According to UN Mine Action Service (UNMAS), multiple wars have left Gaza contaminated by ERW. ERW pose a particular danger to Gaza’s children who may come across them while walking, playing, or working.

The electricity shortage was exacerbated in June, when Israel reduced Gaza’s electricity supply by 40 percent, at the Palestinian Authority’s request.

Hospitals have turned to generators to fill the gaps but these, too, are an unreliable power source. When they fail or need repairs, new parts or replacement machines are hard to come by because of blockade restrictions.

The blockade often prevents Palestinians in need of medical attention from leaving Gaza and medical aid from entering. In May 2017, Israel denied or delayed over half of the applications for patients to leave Gaza for medical reasons, including 255 children, according to a World Health Organization report.

Each day, more than 100 million liters (26 million gallons) of sewage is being released into the Mediterranean Sea because of Gaza’s meager access to energy for waste water treatment.

Ahmad K., 9, used to live in an apartment block with his family in Beit Hanoun. After their home was destroyed, they relocated to a temporary trailer with inadequate access to water or electricity. In winter, Ahmad came down with both the flu and typhoid fever.

“All my brothers have fallen ill during our stay at the UNRWA school and in the trailer,” he told DCIP, adding, “My other brother, Dawoud, has anemia because of the poor food we eat.”

The blockade, punctuated by repeated Israeli military incursions, paints a dark picture of the future for children.

The 2014 assault caused an estimated $4.4 billion loss in damages. After, poverty spiked to 39 percent and unemployment reached a staggering 43 percent, likely the highest in the world.

One father, Sa’d B., 30, explained he and his family have barely been able to make ends meet since his donkey—his family’s primary source of income—was killed in a strike during the 2014 assault. Sa’d has since been forced to rely on supplemental income from his children.

“I had to take [my children] to the dumpster in Yarmouk area to collect and sell plastic objects…[It’s] dangerous because of the many diseases, germs, flies, and smells, and they could get injured by the glass and metal objects,” Sa’d told DCIP. “I wish I would die instead of living like this. I see my children in need and there is nothing I can do about it.”

Sa’d and his family are not alone. Economic destitution in Gaza has left families unable to meet their most basic needs, forcing many to rely on income from their children, putting children’s educations and futures at risk.

Even for children who don’t need to work to survive, access to education in Gaza has become increasingly difficult. According to the UN Development Programme (UNDP), over half of Gaza’s educational facilities were damaged during the 2014 assault, affecting an estimated 559,000 students.

The horrible truth for children in Gaza is that survival, itself, is a challenge. According to a UN report, Gaza may be uninhabitable in just three year’s time. This humanitarian crisis is entirely man-made and it can be stopped. As the world marks this dark 10 year anniversary, we must demand an end to the military siege so children in Gaza can enjoy a safe and secure future.