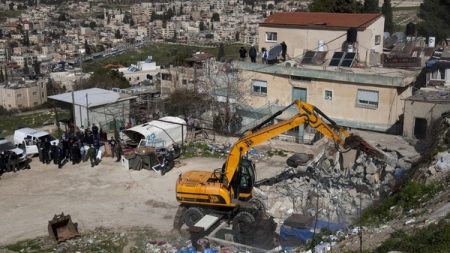 Israeli forces have continued carrying out demolition procedures on Palestinian homes, this week, beginning on Wednesday, with the destruction of several shops in the Shu’fat neighborhood of East Jerusalem, a major center for the city’s refugee population.

Dozens of Israeli soldiers also  invaded, on Wednesday, scores of Palestinian homes and shops in Deir al-Ghosoun town, north of the northern West Bank city of Tulkarem, after detonating their doors, firing many flares, gas bombs and concussion grenades.

Israeli forces stormed Duma village, south of the northern occupied West Bank district of Nablus, on the same day, and demolished a Palestinian home under the pretext that it was built without the difficult-to-obtain Israeli permit.

The following day, Israeli bulldozers demolished a Palestinian-owned family home, workshop, and a structure, in Rahat town of the Negev Desert region in southern Israel, under the pretext that the structure was built without the difficult-to-obtain Israeli permit.

According to Ma’an sources, Israeli forces came with bulldozers and stormed the area, closed all main streets, preventeing residents from reaching the area.

The Israeli government has plans to evacuate thousands of Bedouin residents to officially recognized Bedouin townships, one of which is Rahat, in order to build new housing on the evacuated land for non-Bedouin Israeli citizens.

According to Israeli human rights group Adalah, the plan would “result in the destruction of 35 ‘unrecognized’’ Arab Bedouin villages, the forced displacement of up to 70,000 Arab Bedouin citizens of Israel, and the dispossession of their historical lands in the Negev.”

Bedouin communities in the Negev have been the target of a heightened demolition campaign in recent weeks, following Israeli leaders publicly expressing their commitment to demolish Palestinian structures lacking difficult to obtain Israeli-issued building permits across Israel and occupied East Jerusalem in response to the Israeli-court sanctioned evacuation of the illegal Amona settler outpost in 2017.