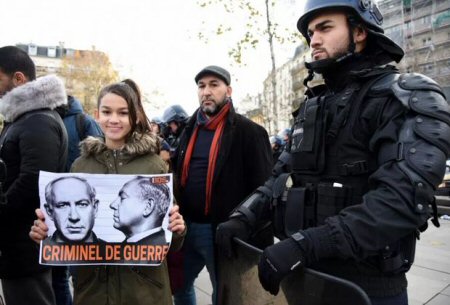 Palestinians and pro-Palestine activists worldwide continued their protests against US American President Donald Trump’s recognition that Jerusalem is Israel’s capital.

Days of Palestine reports that hundreds staged a protest in Paris against Israeli Prime Minister Benjamin Netanyahu’s visit to France on Sunday.

Thousands protested outside the US Embassy in the Indonesian capital on Sunday, against Trump’s decision, many waving banners saying “Palestine is in our hearts.”

Leaders in Indonesia, home to the world’s largest Muslim population, have joined a global chorus of condemnation of Trump’s announcement, including Western allies who say it is a blow to peace efforts and risks sparking more violence.

In Canada, hundreds marched from the US Embassy to the Israeli Embassy in Ottawa, calling on Canada to put more pressure on Trump to reverse his controversial declaration.

Several Western, Asian and African capitals witnesses thousands of protesters taking to the streets against the decision.