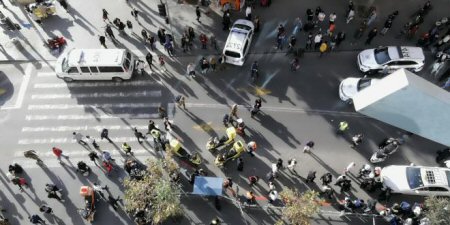 A Palestinian man allegedly stabbed and wounded an Israeli security guard at the entrance to the Jerusalem central bus station Sunday, although the motivation behind the attack remains unclear.

According to the Israeli police spokesman Micky Rosenfeld, the alleged attacker pulled out a knife and stabbed the security guard before attempting to flee. Security camera footage from the bus station shows a young man removing his jacket, then pulling out an object, presumed to be a knife, and stabbing the guard in the chest, then running off. Israeli police detained 24-year old Yassin Abu al-Qar’a, from Wadi al-Far’a area, north of Nablus, in the northern West Bank, and charged him with the crime.

The injured security guard, who was not identified, was taken to a hospital in Jerusalem with a stab wound to his upper body, Magen David Adom (MDA), head of Israel’s national medical emergency service, said on Twitter. This incident followed three days of massive protests in every part of the West Bank and Gaza, calling for an end to the occupation and the opening of the sacred city of Jerusalem. Four Palestinians were killed by Israeli forces since Wednesday, and more than 800 injured.

The protests challenged the US President’s announcement that the US will join Israel as the only two countries in the world to claim that Jerusalem is the capital of Israel – thus denying the rights and legitimate claims of the hundreds of thousands of Palestinian residents of the city. In making this claim, Donald Trump decided to undo decades of US foreign policy by claiming Jerusalem as the capital of Israel. He also revealed plans to move the US embassy from Tel Aviv to Jerusalem.

Palestinians observed 3 days of rage in, protest of the decision, which they saw as complete disregard of their rights in the city of Jerusalem and a violation of international laws that oppose any unilateral step in reaching a solution for the Palestinian-Israeli conflict and the issue of Jerusalem.

Israeli police were heavily deployed in the area following the alleged stabbing attempt, according to WAFA.