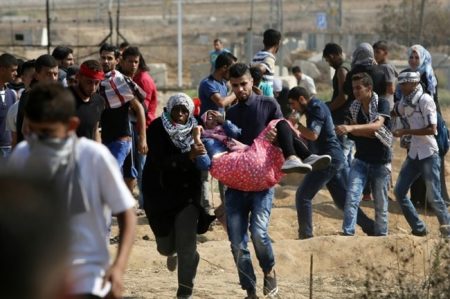 A Palestinian protester is evacuated after being injured during clashes with Israeli security forces near the border with Israel, east of Gaza City in October 2015 (AFP, File)

At least two Palestinians, one woman and one minor, were shot and injured by Israeli forces in the southern Gaza Strip district of Khan Younis on Saturday morning, as Palestinians continued to demonstrate along the border with Israel in protest of US President Donald Trump’s recognition of Jerusalem as Israel’s capital.

Witnesses told Ma’an News Agency that Israeli forces opened fire on Palestinian school students in the eastern area of the town of Khuzaa — along the border with Israel — in southern Gaza.

The students had reportedly marched to the border in protest around 9 a.m., and were met with live fire from Israeli forces.

One school student was injured and transferred to the Nasser Hospital where his injuries were reported as moderate. His identity remains unknown.

Several other students were reportedly treated on the scene for severe tear-gas inhalation.

Around 11:30 a.m., the Palestinian Ministry of Health reported that a Palestinian woman had been shot, also in the Khuzaa area, with live ammunition by Israeli forces in the shoulder, and was transferred to the hospital where she was reported to be in moderate condition.

Hundreds of Palestinians have been injured and four have been killed over the past 3 days, since Trump’s announcement, which has the entire region, with protests erupting all accross the Middle East, in the US, and the UK.

Protests are expected to continue, as Palestinians commemorate the 30th anniversary of the First Intifada on Saturday.