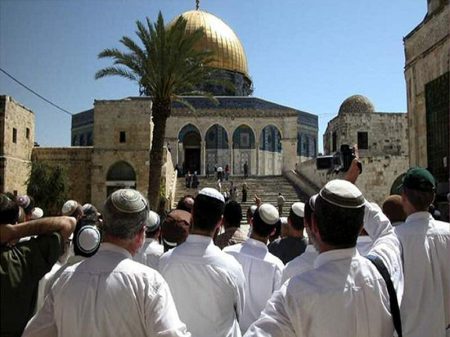 Members of the so-called “Temple Mount” movement are publicly calling its followers to participate in wide scale mass raids on Al-Aqsa Mosque, on Sunday, after the US president Donald Trump announced occupied Jerusalem the capital of Israel.

According to Al Ray Palestinian Media Agency, followers and settlers were called to participate in mass rallies organized in Jerusalem, Sunday evening, in front of Al-Asbat gate. The aim of the rallies is to legitimize the entry of Israelis into the mosque via all gates and increase the hours of visits to the holy site.

Settlers and Israelis used to enter the compound via Moroccan gate, to which the Israeli occupation seized the keys after the 1967 war.

Al-Aqsa Mosque is subjected to a series of extremist storm-ins during morning hours and afternoon periods in an attempt to impose the temporal and spatial division plan of the mosque.