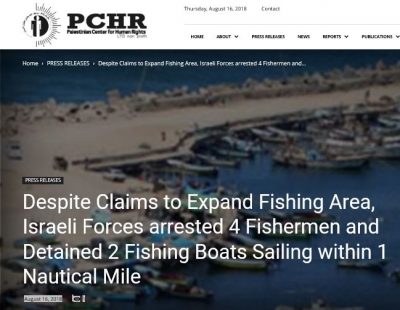 These violations refute the Israeli authorities’ claims regarding easing the ongoing naval blockade and expanding the  fishing area to 9 nautical miles off the Gaza shore, which were announced on Tuesday 14 August 2018.

According to the Palestinian Center for Human Rights (PCHR’s) investigations, at approximately 6:55, on Thursday morning, 16 August 2018, Israeli gunboats chased and opened fire at Palestinian fishing boats sailing within 1 nautical mile off Beit Lahia shore in the northern Gaza Strip.

The Israeli gunboats then surrounded 2 fishing boats. One of the 2 boats was manned by Ra’fat Mohammed ‘Ali al-Sultan (48) and Tawfiq Sa’eed Ashour al-Sultan (50), while the other boat was manned by Mohammed Ahmed Mohammed Zayed (58) and his son Tamer (35).

The Israeli naval soldiers ordered the fishermen to take off their clothes, jump into the water and swim towards the gunboat. The fishermen were arrested and the fishing equipment and boats were confiscated.

In light of the above, PCHR strongly condemns the Israeli ongoing attacks against Palestinian fishermen in the Gaza Strip. Therefore, PCHR: