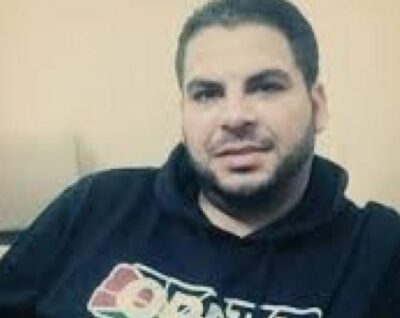 A Palestinian human rights defender, identified as Mohammad Zghayyar, 33, from the southern West Bank city of Hebron, has suspended a hunger strike, which lasted for twenty days, after an agreement for his release was reached.

The detainee was abducted by the soldiers from his home in April and was held for several weeks at the Etzion military base, near Hebron, before he was moved to Ofar prison, near Ramallah, and from there, he was transferred to the Negev Detention Camp after he was slapped with a fourth-month Administrative Detention order, without charges or trial.

Just before the first administrative detention order was finished, Zghayyar was slapped with another order for four additional months.

Twenty days ago, the detainee started a hunger strike demanding to be released, or at least be sentenced to a determined period without the constant renewals of detention orders without charges, and the continuous uncertainty.

The agreement, which was reached by the Israeli Prison Authority, states that he will be released on April 20, 2021.

During his strike, Israel refused to allow his lawyer or his family to visit with him, and kept him placed in solitary confinement.

It is worth mentioning that Zghayyar, a married father of three children, between the ages of 18 months and six years, is also a former political prisoner who was held by Israel for four years.

He is also the spokesperson of the Youth Coalition Against Settlements, in Hebron, and is a known activist for social and political rights.