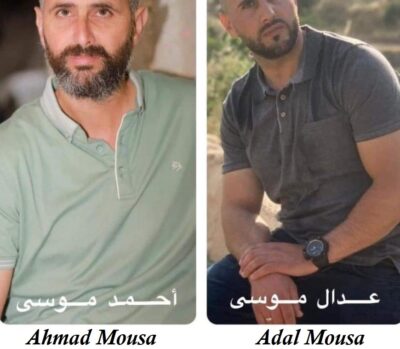 The Palestinians Detainees’ Committee has reported that two siblings imprisoned by Israel under arbitrary Administrative Detention orders without charges or trial are ongoing with the hunger strike they started 31 days earlier.

The Committee’s spokesperson, Hasan Abed-Rabbo, said Ahmad Mousa, 44, is currently held at the infamous Ramla prison clinic that lacks specialists and basic supplies, despite his heart and kidney diseases.

Abed-Rabbo added that Ahmad and his brother Adal, 34, from the Al-Khader town, south of the West Bank city of Bethlehem, started the hunger strike on the second day after the soldiers abducted them on August 7th, 2022.

The two detained siblings are also former political prisoners, and in the year 2019, Ahmad held a hunger strike for 31 days, protesting being held under Administrative Detention orders, and suffered a stroke that impacted his arm and leg. At the time, he ended the strike after reaching an agreement for his release.

His brother Adal, a married father of two children, was imprisoned by Israel for seven years, including five years of continued imprisonment. In related news, Jawad Jawareesh, 41, from Bethlehem, continues the hunger strike he started six days earlier, demanding to be allowed to visit with his two imprisoned brothers.

Jawareesh was abducted in the year 2002 and has since been barred from visiting his brothers, Abdullah and Orabi, due to various Israeli allegations and restrictions,

He is serving a life sentence and was frequently placed in solitary confinement; Jawad is a married father of two girls, including one who was only eight months of age when the soldiers abducted him.