Israeli Soldiers Injure A Palestinian Before Abducting Him Near Nablus 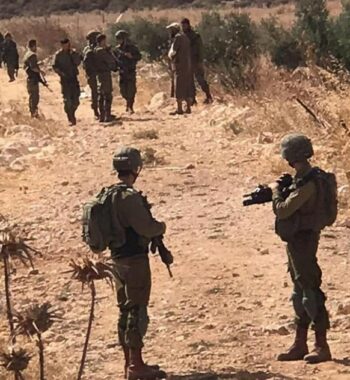 On Wednesday, Israeli injured a Palestinian man before abducting him in Salem village, east of Nablus, in the northern part of the occupied West Bank.

Ahmad Jibril, the head of the Emergency Department of the Palestinian Red Crescent Society (PRCS) in Nablus, said the soldiers fired at Mohammad Daoud Shtayyeh, causing burns and shrapnel wounds in his arm and abdomen.

Jibril added that PRCS medics rushed to the scene and tried to provide Mohammad with the needed treatment, but the soldiers barred them from reaching him and took him to an unknown destination.

The Israeli army claimed the Palestinian tried to snatch a weapon from a soldier before the soldiers fired a warning shot and abducted him.

It added that the Palestinians suffered burns from the rifle’s barrel and received treatment before he was arrested.

Earlier Wednesday morning, Israeli soldiers killed Younis Ghassan Tayeh, 21, after shooting him with a live round in his heart in the al-Far’a refugee camp, south of Tubas, in the northeastern West Bank, and abducted Odai Tayeh and Maan Amin al-Ghoul, 22.