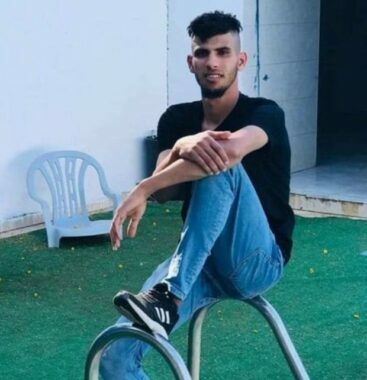 The Palestinian Health Ministry has confirmed that the soldiers killed Younis Ghassan Tayeh, 21, after shooting him with a live round in his heart.

It added that the Palestinian medics rushed Younis to a hospital in Tubas, but he succumbed to his serious wounds.

The soldiers invaded the refugee camp, leading to protests, and attacked the Palestinians with dozens of live rounds, rubber-coated steel bullets, gas bombs, and concussion grenades.

The soldiers also stormed and ransacked the family home of the slain Palestinian and interrogated his family.

In addition, the army abducted Odai Tayeh and Maan Amin al-Ghoul, 22, from their homes and invaded the home of former political prisoner Yousef Tayeh to abduct him but could not find him.

After Tayeh’s death, the Palestinians declared a general strike in the Tubas governorate to mourn his death.

On Monday dawn, September 5, the soldiers invaded Jenin city and Qabatia town, in the northern part of the occupied West Bank, killed a young man, Taher Mohmmad Zakarna, 19, injured another, and abducted five.

On Thursday dawn, September 1, the soldiers killed Yazan Naim Affana, 24, after shooting him with live fire while the army withdrew from Um ash-Sharayet neighborhood in Al-Biereh city after the army invaded the Al-Biereh city in the Ramallah and Al-Biereh governorate, in the central part of the occupied West Bank.

On the same day, the soldiers killed Mahmoud Suleiman Khaled, 25, in front of the main entrance of Balata refugee camp, east of Nablus, in the northern part of the occupied West Bank.