Detained Teen Released After Losing His Sight Due To Torture, And Being Denied Treatment 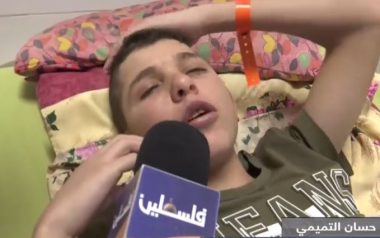 A detained Palestinian teen, identified as Taiseer Hassan Tamimi, 18, from Deir Nitham village, northwest of Ramallah, in central West bank, was released, Monday, after he lost his sight while in prison, due to torture and after being denied specialized medicine or any treatment for preexisting health conditions.

Tamimi required specialized treatment, and ongoing consumption of medications at specific times, in addition to vitamins, but was denied access to them.

He was abducted by the army on April 7th, and suffers from liver and kidney diseases, but after he was denied access to specialized care and medications, his health condition witnessed a sharp deterioration, eventually resulting in him losing his eyesight.

After Tamimi became blind, Israel released him unconditionally, after already causing him to lose his eyesight.

“They did not give me any medication, and I lost my eyesight. I fell into a coma for three days, and I stayed a total of five days in Intensive Care, and when I regained consciousness, I could not see a thing, so I told my mother ‘am awake, but I cannot see anything,’ and that is when she told me that I became blind.”

The head of the Palestinian Detainees Committee in Bethlehem, Monqith Abu Atwan, told the Palestinian TV that, what Tamimi was subjected to, is a crime committed by Israel, especially the severe torture he suffered, including repeated strikes to his head.

“The Israeli Prison Authority is becoming even more aggressive against the detainees, especially detained children,” he said, “Almost instantly after Tamimi was taken prisoner, lawyers of the Detainees’ Committee and the Palestinian Prisoners’ Society, tried to deliver the medications to him, but the requests were denied by Israel, and he was not provided any treatment until he lost his eyesight.”

“This is yet another crime in a long list of crimes and violations carried out by the Israeli occupation against the Palestinian detainees. Tamimi was reputedly tortured and beaten” Abu Atwan added, “The Palestinian leadership and rights groups in Palestine, are documenting these violations to submit them to the International Criminal Court.”

The official also stated that, by refusing the entry of his medications, and by refusing to provide him with the needed treatment, Israel committed another violation to International Law, and the Fourth Geneva Convention, especially regarding the rights of prisoners, held by an occupying power.

“The Palestinian leadership filed complaints with several human rights groups, and international organizations, asking them to act on ending the serious Israeli violations, and condemn them, especially denying the ailing detainees the urgently needed treatment” he added, “We are also preparing to file an official complaint with the United Nations, asking them to act and effectively end these crimes, including the recent death of detainee Aziz ‘Oweisat.”

“But we also know well the inaction and silence of these international organizations, including the United Nations, especially since its Human Rights Coordinator never even asked to visit Israeli prisons where the Palestinians are held, to observe what they are going through every single day.” Abu Atwan added.

It is worth mentioning that Aziz ‘Oweisat died at an Israeli hospital, on May 20th 2018, from serious complications after he was assaulted by several Israeli soldiers in prison, when they claimed he attacked an officer.