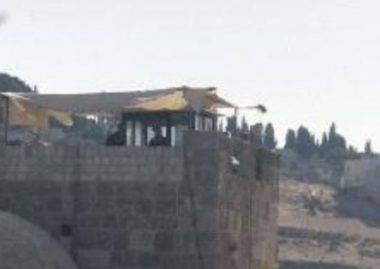 Israeli soldiers installed, Monday, a monitoring post on the rooftop of Bab ar-Rahma Hall, in the Al-Aqsa Mosque compound, in occupied East Jerusalem.

Firas ad-Dibis, the head of the Waqf and Islamic Endowment Department, said the soldiers installed the monitoring post, after detaining the local guards of the holy site in one area, and prevented them from performing their duties.

He added that the soldiers also detained the head of the Guards’ Department, repeatedly assaulted him, and released him several hours later.

The soldiers also ransacked areas where local volunteers cleaned and organized the site during the Holy Muslim Month of Ramadan, to provide better accommodations for the worshipers.

In addition, the army uprooted trees in the compound, and attacked several guards, while groups of Israeli colonizers stormed the compound and conducted provocative tours.