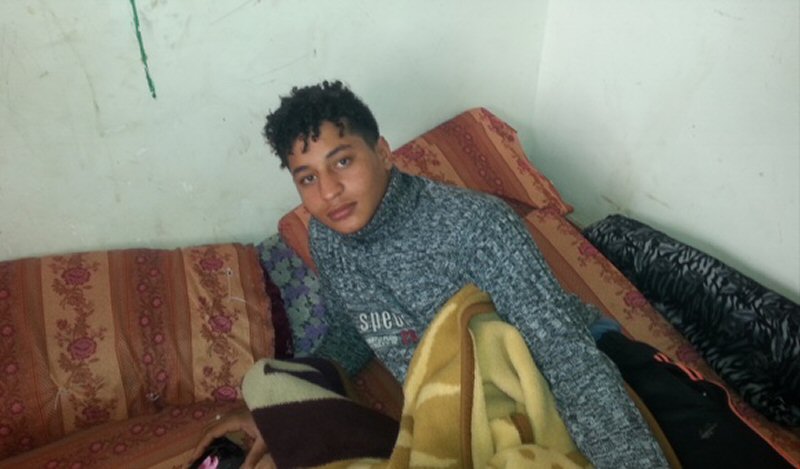 Mustafa Salman, 16, died on September 22 following his suicide attempt while being detained at a police station in the northern Gaza Strip. (Photo: courtesy of Salman’s family)

Ramallah, October 4, 2017 — Children in conflict with the law in Gaza, under the current Hamas-led government, are at severe risk of rights violations and abuses during detention, based on six cases documented by Defense for Children International – Palestine since January.

Six children, aged 15 – 17, were detained for a period of one night or longer at police stations across Gaza including Rafah, Khan Younis, Gaza City, Beit Lahia and Jabalia refugee camp, instead of at a facility approved for juveniles. In the worst instances, three children were tortured during police interrogations, and one child was reportedly physically abused by police station guards and adult prisoners whom he was forced to share a cell with, prompting the boy’s suicide attempt and resulting death on September 22.

Detention at a police station, with adults

Mustafa Salman, 16, attempted to commit suicide by hanging himself above a toilet in a Beit Lahia police station cell on September 2, after two months of detention there. Unable to recover from the oxygen deprivation to his brain, medical sources in Shifa Hospital, Gaza City declared Mustafa clinically dead.

In a sworn affidavit to DCIP, Mohammad Fayeq Salman, Mustafa’s older brother, said the police stormed the family house at approximately 5:30 a.m. on July 2 and arrested Mustafa. Salman reported that Mustafa had gotten into a physical altercation with a young man earlier over a bag of potatoes, during which the young man’s hand was wounded, spurring him to file a police complaint.

Salman stated that Mustafa was held in a cell inside Beit Lahia police station with around 30 adult prisoners. During visits with them, Salman said Mustafa confided that he was being targeted by adult prisoners and badly treated by guards.

“The prisoners treated him with contempt, forcing him to sit at the door of the toilet. They did not allow him to sit with them. They forced him to serve them because he was the youngest. That led to multiple fights, in which he was beaten,” stated Salman.

Salman added that Mustafa told him the police station guards offered no protection to his brother, and instead physically assaulted him further when Mustafa banged on the cell’s door for help.

Mustafa’s mother, similarly heard first-hand from Mustafa of the poor treatment he was receiving, based on the brief visits she was permitted with him. “He told me about his problems with other prisoners, and that he doesn’t eat well and sleeps next to the bathroom door,” his mother said to DCIP.

The incident is currently under investigation by the Palestinian Ministry of Interior in Gaza and local police.

In an interview with DCIP, the chief of police for the Beit Lahia station said he had transferred Mustafa to Dar al-Rabee’a juvenile rehabilitation center, but the center refused to receive him because of overcrowding and Mustafa’s stature, suggesting the teen looked older than his stated age. The chief asserted that the juvenile center provided an official document denying the transfer, with these two reasons cited, forcing police to keep Mustafa detained at the station.

The Beit Lahia police chief moreover denied that Mustafa was assaulted or in any way harassed, either by the police or other detainees.

Anwar Atiyya, director of Dar al-Rabee’a juvenile rehabilitation center in Gaza, also spoke to DCIP and denied turning away the teen. Atiyya said that there had been no contact between Beit Lahiya police station and Dar al-Rabee’a regarding Mustafa’s case, saying he had never heard of Mustafa’s case before news of his attempted suicide emerged.

Atiyya emphasized that the center does not reject any juvenile transfers on the basis of their physical appearance, as long as they have official documents proving they are below the age of 18.

Like Mustafa, three other children whose cases DCIP documented were detained with adults while being held at police stations.

Use of torture during interrogation

“Tariq”, 16, was exposed to torture while detained in southern Gaza in early May. When he denied the accusation of theft, interrogators at the police station hung Tariq from the ceiling by a rope and assaulted him.

“They blindfolded me with a piece of cloth, tied my hands behind my back with a rope and tied my feet with a rope. Then, they hung me from the ceiling and beat me on my soles with a rubber stick,” said Tariq, in his sworn statement to DCIP.

“Waseem”, 16, from central Gaza, was also arrested in May and suffered cruel and inhumane treatment, amounting to torture, during interrogation. In his sworn testimony, the teen told DCIP that the police interrogator suspended him by his hands, which were bound behind his back, before assaulting him with a whip.

“He tied my hands behind my back with a rope and then to a window and pulled me up from the rope and told me to stand on my toes. I felt my shoulders were dislocating. It was so painful and unbearable,” stated Waseem. “I screamed and begged him to stop. He was joined by another man. One of them hit me all over my body with a donkey whip.”

When taken to the hospital, Waseem said he was instructed by police to tell staff there that he had no injuries, despite visible bruises.

In January, 17-year-old “Ibrahim” was bound, tied to a stick and extensively beaten in a central Gaza police station. His father, who had accompanied him to the police station, was told to leave before the interrogation began.

Another child, 15, was slapped and shown a hook in the ceiling in a southern Gaza police station interrogation room.

“‘So, you want to confess or what?’ said one of the six men, who were in civilian clothes, while looking at the hook. As I understood from the looks of his eyes, he wanted to hang me on the hook,” the boy reported, in his sworn statement.

Although a small number of cases, the geographic distribution of the cases suggests that they may be part of a larger pattern of violations against children taking place in the Gaza Strip.

Children should never be detained with adult populations or subjected to cruel treatment, according to international law standards and the juvenile protection law, which was enacted by the Palestinian Authority in 2016.

Article 4 of the juvenile protection law states: “A juvenile shall not be subjected to physical or mental torture, cruel, degrading or inhumane treatment.” Article 20 stipulates that a juvenile “may not be detained” but where necessary, they should be held in “social welfare homes under the supervision of a child protection counselor” or, in the absence of such place, “the juvenile must be placed in a juvenile detention facility.”

The juvenile law also stipulates that children are entitled to the presence of a lawyer during interrogation and trial.

Political division between the Hamas-led government in Gaza and the Palestinian Authority in the West Bank since 2007 has highly impacted the judicial system, however, and the juvenile protection law was only implemented in the West Bank.

Local laws in Gaza, remain out of step with these newer and more expansive protections, relying instead on the British Juvenile Offenders Ordinance of 1938.

Jamal Hawilah, a lawyer practicing in Gaza, told DCIP that under current law in Gaza, children are not entitled to legal counsel except in felony cases, as an example of critical legal protection gaps.

“I stood alone before a judge and did not understand what was going on,” said one child of his court hearing, in which he had no lawyer or parent present. “The police told me that I should say I was guilty when asked by the judge, so the next time I appeared in court, I told the judge I was guilty.”

Hawilah told DCIP that the Juvenile Offenders Law of 1938 is one of the key obstacles facing juveniles today in Gaza.

The Hamas-led government in Gaza is responsible for implementing legal and practical protections for children and ensuring treatment of juvenile detainees is in accordance with international standards.

At DCIP official: Right to a Childhood — West Bank Refugee Camps are Facing a Crisis of Safety and Square Feet