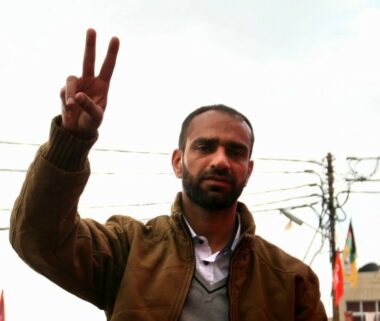 On Monday, the Palestinian Detainees’ Committee said that political prisoner Samer Al-Isawi started a hunger strike fifteen days ago and was moved to solitary confinement in the Ramon Israeli prison.

The Committee said Samer was forced into solitary confinement two days ago after he refused to end the hunger strike he launched in solidarity with the families of slain Palestinian demanding Israel to allow the release of their corpses for proper funeral and burial ceremonies.

The Committee added Al-Isawi was injured two days ago after the soldiers assaulted him when they invaded Section 25 of the Negev Detention Camp.

It is worth mentioning that Samer was abducted in the year 2003 and was sentenced to 30 years in prison before he was released under the Shalit Prisoner Swap agreement in 2011, but he was abducted again in July 2012.

Immediately after his abduction in 2012, Al-Isawi held a hunger strike for nine months and was released in 2013 before he was abducted again in 2014.