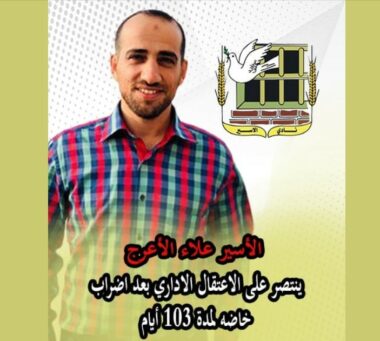 The Palestinian Prisoners’ Society (PPS) has reported, Thursday, that detainee Ala al-A’raj has ended the hunger strike which lasted for 103 days after reaching an agreement canceling his arbitrary Administrative Detention orders without charges or trial.

Attorney Jawad Boulus of the PPS said a court session was held, Thursday, in which the Salem Israeli military court has voided the Administrative Detention orders, holding him captive without charges or trial, after the Israeli prosecution agreed to file a formal indictment.

The agreement does not secure his release, but voids the arbitrary Administrative Detention orders, pending charges that would be filed against him.

Administrative Detention orders are repeatedly renewed against the detainees without charges or trial, and each order is usually for 3-6 months; many detainees spend years in prison under these constantly renewed orders.

The PPS said that Ala al-A’raj, 34, a civil engineer from Anabta town near the northern West Bank city of Tulkarem,  was abducted in June of this year, and was slapped with an Administrative Detention order before he decided to hold a hunger strike.

The hunger strike caused various serious complications, before he was placed in the Ramla prison clinic, and was frequently transferred to Israeli hospitals.

It is worth mentioning that al-A’raj is also a former political prisoner who was repeatedly abducted and detained by Israel since the year 2007 and spent five years in prison. During his various imprisonments, his father passed away, and his wife gave birth to their only son.