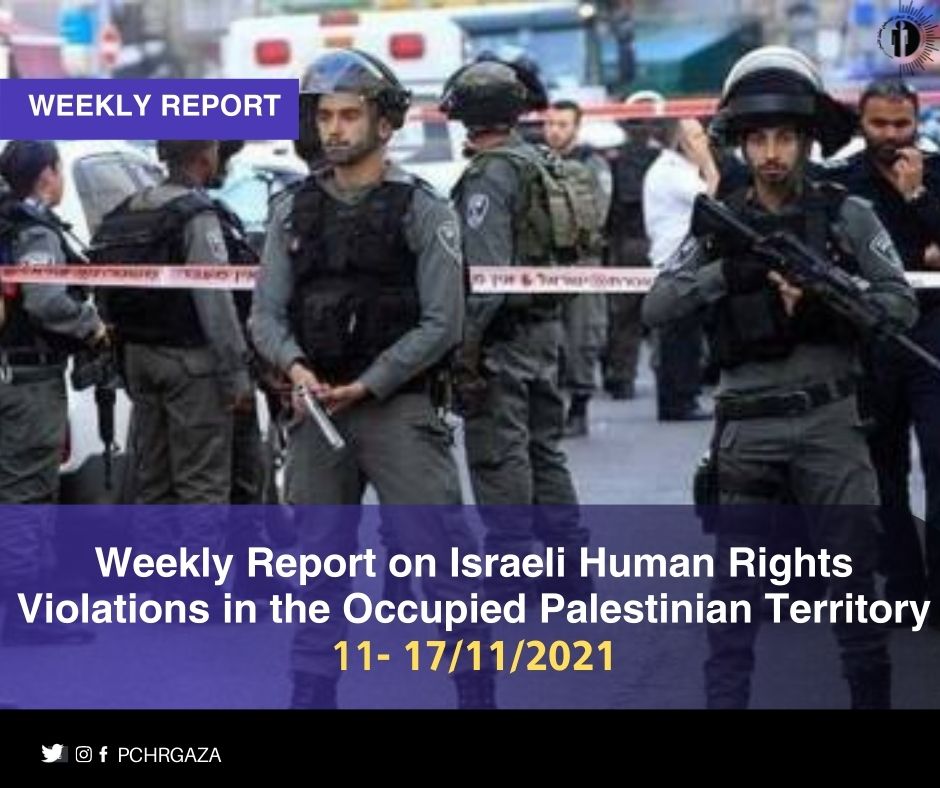 The Israeli settlement expansion works continued on Palestinian lands and properties. Meanwhile, the Gaza Strip enters its 15th year under closure, exacerbating the humanitarian hardships across the territory.

On 17 November 2021, Omar I. Abu-Asab (16) from al-‘Isawiya was killed by army gun fire allegedly for carrying out a stab attack that wounded two members of the Israeli border guards near al-Aqsa Mosque.

A child was wounded during clashes in Jerusalem, and 2 others during an army incursion into Nablus.

In the Gaza Strip, PCHR documented 1 Navy shooting at fishing boats in the Gaza Sea, and two other shooting incidents on agricultural lands in eastern Gaza, by the army.

Israeli forces carried out 107 incursions into the West Bank, including occupied East Jerusalem. Those incursions included raids of civilian houses and shootings, enticing fear among civilians, and attacking many of them. During this week’s incursions, 56 Palestinians were arrested, including a child and 2 women.

In the Gaza Strip, soldiers arrested 1 Palestinian attempting to cross the border area in northern Gaza.

Hebron: tin-plate taken from a barracks in Wad al-Mughair (valley); 5 dunums of land razed in Beit Ummar; a barracks dismantled and a ground floor of a house demolished in Yatta. A barracks and 4 greenhouses demolished as well as a sheep barn in Tarqumiyah.

Occupied Jerusalem: Palestinians assaulted on Jaffa street, and another shot and wounded with live bullets in Ras al-Amoud.

Hebron: one Palestinian wounded in settlers’ attack on farmers.

Additionally, occupation authorities continued to divide the West Bank into separate cantons with key roads blocked by the Israeli occupation since the 2000 Second Intifada -still closed to this date- and with temporary and permanent checkpoints, where civilian movement is restricted, and they are subject to arrest, especially at al-Karama border crossing, alongside the Palestinian-Jordanian border.

Meanwhile, a number of Palestinians gathered at the southern entrance to Tubas, near Tubas Filling Station, and threw stones at military vehicles stationed near the university. Israeli forces immediately fired live and rubber-coated steel bullets, sound bombs and teargas canisters at the protestors. As a result, Sadam Hussain ‘Abed al-Wali Bani ‘Odah (26), from Tammun nearby village, was shot with a live bullet that penetrated his heart and settled in the lungs. Bani ‘Odah was taken via civilian car to Tubas Turkish Hospital, where it was turned out that he is in critical condition. Doctors tried to save his life, but in vain. According to PCHR’s investigations, Bani ‘Odah was wounded while he was 30 meters away from the Israeli soldiers, who were exposed to limited stone-throwing at that time; therefore, there was no imminent danger or threat to the lives of soldiers justifying firing live bullets at Bani ‘Odah along with other protestors.

An eyewitness said to PCHR’s fieldworker that:

“at approximately 05:52, while I was near Tubas Filling Station on the main Street, where a group of Palestinians were throwing stones at Israeli soldiers stationed in front of al-Quds Open University, a car arrived from the southern side of Tubas coming from Tammun village. After that, four citizens stepped out of the car. I knew one of them; he was Saddam Bani ‘Odah. I noticed that Saddam was throwing stones along with other protestors at the army stationed in front of the university. Suddenly, Sadam fell next to me on his back. I carried him along with a group of protestors and put him in a taxi that was parked in the area. The taxi took him to Tubas Turkish Hospital. Later, I went to the hospital, where doctors declared his death succumbing to his wounds he sustained after being shot with a live bullet that settled in his lung. It should be noted that there was no imminent danger to soldiers’ lives as protestors only threw stones from a distance of 10 meters at them, whereas Israeli soldier responded with live bullets and teargas canisters.”

During the incursion, Israeli forces moved about 400 meters to the southern entrance to the city, where clashes and stone-throwing occurred. They raided and searched houses, from which they arrested Hamza Omar Nimer Daraghmah (28) and Aysar ‘Izat Musalamani (28). In the morning, an exchange of fire took place with gunmen, but no casualties were reported.

IOF published footage documenting the incident. The footage showed a young boy points a knife at two border guard officers while they were walking on a street in occupied East Jerusalem and tries to stab one of them in the upper back. After that, a fight erupted between the two officers and boy, during which, a person in civilian clothes opened fire at the boy from his pistol from one-meter distance, so he fell on the ground. Afterwards, soldiers gathered in the area.”

PCHR continues to investigate the incident and its circumstances and points out that the footage indicates that the officers could have neutralized/controlled the boy without killing him, and the person who opened fire is likely one of the settlers in the area.[1]

In its aftermath, soldiers shut off Bab al-Amoud and Bab al-Sahira (Herod’s Gate) and banned movement in and out of Jerusalem’s Old City. The army also closed Qalandiya checkpoint and cleared the area surrounding Bab al-Asbat.

Meanwhile, violent clashes occurred between Palestinians and IOF who fired teargas canisters and sound bombs at them. As a result, dozens of citizens suffocated due to teargas inhalation.

Settlement Expansion and settler violence in the West Bank

a. Land razing, Demolitions, and Notices

Salhab said to PCHR’s fieldworker that:

“Soldiers, Border Police, and Civil Administration vehicles moved into the area surrounding our houses. Soldiers deployed in the vicinity and the Civil Administration officers dismantled the barrack, which I established for auto repair, without any demolition decision. After finishing dismantling the tin plates, the officer told me to dismantle the rest steel tubes so that he would not issue a notice to demolish them.”

It should be noted that this family depends on grazing sheep and lives in that area to feed sheep from natural pastures as the family owns 250 sheep. The Israeli authorities previously handed notices to stop construction works on 23 July 2021 as Jamrourah area is located in Area C according to the Oslo Accords.

Jad ‘Aqel (20), from Shu’fat village, north of Jerusalem, said that he was with his friend, Nour Abu Khudeir (20) on Jaffa Street on their way back from work late at night. He added that a group of settlers, around 15, were on Jaffa Street and tried to provoke them. They could not at first, but verbal altercations occurred between them.

“When we continued walking, the settlers attacked us and sprayed pepper gas at our faces, then one of them hit me on the head and I fainted.”

“The settlers gathered and attacked us with pepper spray… I could not see anything anymore. I moved away a little after someone hit me on the back with a sharp tool.” He said that he tried to open his eyes when the Israeli police arrived and all the settlers escaped. He then saw his friend Jad lying on the ground unconscious with blood running down his face. An ambulance arrived and took him to Hadassah Hospital, where he woke up from time to time.”

“I was in the lands adjacent to “Asfar” settlement to survey the lands there for the Palestinian Land Settlement Authority, and there were a number of Israeli soldiers as I coordinated with the Israeli side before I arrived at the land. At around 10:00 when I was about to finish my work, a group of about 20 settlers attacked the farmers in their fields and started throwing stones at them. I asked the soldiers to walk me out of the area, and 2 soldiers walked me 20 meters and then came back. My vehicle was a kilometer away from the site, so I continued walking. Meanwhile, four settlers ran towards me and heavily threw stones at me. As a result, a stone hit me in the head, and blood flowed. My glasses and cell phone fell on the ground and crashed. I went to the governmental hospital and later headed to the “Beitar Illit” police station to file a complaint against the settlers.”