Soldiers, Colonizers, Attack Farmers, Prevent Them From Working On Their Lands, Near Hebron 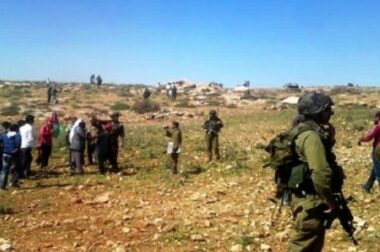 Israeli soldiers and colonizers attacked, Thursday, many Palestinian farmers and prevented them from working on their lands, in the southwestern area of Hebron, in the southern part of the occupied West Bank.

The mayor of Deir Samir town, Shahin ar-Rayyan, said the colonizers, and soldiers, attacked the farmers in the at-Tabaqa area, southwest of Hebron, and prevented them from working on their lands.

He added that the colonizers prevented the Palestinians from bringing machines, including digging tools, while the Palestinians were working on their lands in the at-Tabaqa area, west of Doura town.

In related news, Israeli soldiers closed the roads leading to the Shu’ab al-Batem area, east of Yatta, and photographed many homes and structures, including one building that recently received a demolition order.