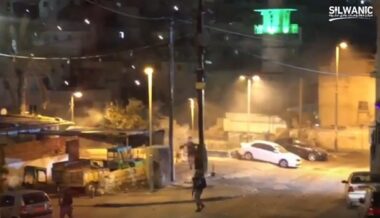 Israeli soldiers injured, on Thursday at night, dozens of Palestinians during protests that erupted after several army jeeps invaded the al-‘Isawiya town, in the occupied Palestinian capital, Jerusalem. The Palestinians were protesting the death of a teenage boy who was killed by the soldiers a day earlier.

Medical sources in Jerusalem said the local medics provided treatment to 17 Palestinians who were shot with rubber-coated steel bullets to various parts of their bodies.

It added that the medics also provided treatment to eleven Palestinians who suffered burns from Israeli gas bombs and concussion grenades, in addition to thirteen who fell while the soldiers were chasing them; two of the wounded suffered fractures to their extremities.

It also said that the medics provided treatment to 95 Palestinians, including women and children, who suffered the effects of tear gas inhalation.

Local sources said the soldiers fired many live rounds, gas bombs, concussion grenades, and rubber-coated steel bullets not only at the protesters but directly at Palestinian homes, leading to this substantial number of injuries.

In addition, the Wadi Hilweh Information Center in Silwan (Silwanic) said the soldiers also invaded Silwan town, in Jerusalem, closed roads, before stopping and searching dozens of residents in Be’er Ayyoub neighborhood (Video by Silwanic), and interrogated many while inspecting their ID cards, leading to protests (Video by Silwanic).

On Thursday, a Palestinian child from the al-‘Isawiya town, identified as Omar Abu Assab, 16, after he allegedly stabbed two officers in the al-Wad Street, in Old City of occupied Jerusalem.