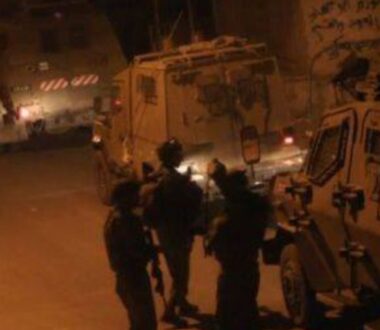 Israeli soldiers abducted, on Thursday evening, a Palestinian man from his shop in Beit Kahil town, northwest of Hebron, in the southern part of the occupied West Bank.

Local sources said the soldiers invaded a neighborhood, in the northern part of the town, and abducted Ali Abdul-Ghafar Dofash from his meat shop.

They added that the soldiers violently searched the shop, causing damage, before abducting Dofash and taking him to a military base In Hebron.

On Thursday at night, the soldiers injured dozens of Palestinians during protests that erupted after several army jeeps invaded the al-‘Isawiya town, in the occupied Palestinian capital, Jerusalem.

The Palestinians were protesting the death of a teenage boy, Omar Abu Assab, 16, who was killed by the soldiers a day earlier after he allegedly stabbed two officers in the al-Wad Street, in Old City of Jerusalem.

The Wadi Hilweh Information Center In Silwan (Silwanic) said the soldiers also invaded Silwan town, in Jerusalem, closed roads, before stopping and searching dozens of residents in Be’er Ayyoub neighborhood (Video), and interrogated many while inspecting their ID cards, leading to protests.

On Thursday at dawn, the soldiers abducted twelve Palestinians from several parts of the West Bank during invasions and violent searches of homes and property.