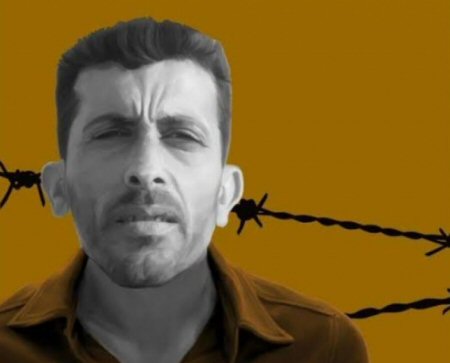 Detainee Sami Mohammad Janazra, 45, from the al-Fawwar refugee camp in Hebron, continues his open hunger strike for the 18th day, in a protest against the renewal of his administrative detention, according to a report released on Thursday, by the detainees and ex-detainees’ commission.

After his visit to the Ofer detention center, the commission’s lawyer explained that Janazra is suffering from a deterioration in his health condition, indicating that he lost much weight.

He added, according to Al Ray Palestinian Media Agency, that Janazra is suffering from a severe pain in the head and kidneys.

It is noteworthy that Janazra is an ex-detainee who was released after one and a half years of administrative detention, during which he held an open hunger strike for 70 days.

He was abducted again on 12 December 2017, and held in administrative detention for four months. A few days before his detention ends, they renewed it for another time.

Administrative detention in an archaic policy, dating back to the days of British Mandate, in which a detainee is held without charge or trial, for periods of up to six months which can be renewed indefinitely.

The commission also noted that Ayman Etbeish, 37, from Doura town, to the south of Hebron, who has been administratively detained since August 1st, 2016, is also engaged in an open hunger strike since 4/4/ 18, in a protest against his solitary confinement which began on 11/27/17.

They noted that Etbeish spent 13 years in the Israeli prisons, the majority of which were in administrative detention.

They pointed out that the prisoner Amir Sarkaji ,21, from Nablus, was arrested on the 5, March 2018, and he has been on a hunger strike for 16 days in protest against his interrogation at “Petah Tikva” detention center.