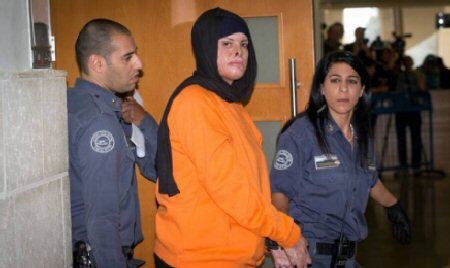 The health condition of the wounded female detainee Israa Jaabis, in Damon prison, is now critical , as the pain resulting from her injury is increasing day by day, due to medical negligence. She also suffers from psychological problems, the commission of detainees and ex-detainee affairs reported, Monday.

The commission explained that Jaabis suffers from burns across her body, causing her skin to feel permanently hot and painful, thus making her unable to use any type of fabric or covering on her body. So, she is in urgent need of a permanent change in the suit for the treatment of burns, to help overcome the pain, and practice her normal life.

She also needs to carry out more than eight surgical operations, including surgery, to separate the remaining fingers of her hands, which dissolved and attached to one other. She also needs to free herself of the mess of a diet via her nostrils, which causes her breathing problems. However, IPS does not care about her suffering, and has not provided the minimum therapeutic requirements for her serious and chronic condition.

The commission hold Israeli occupation the responsibilities of Ja’abs life , calling for urgent intervene to provide her the appropriate treatment.

Israa Ja’abis, 35, from Al-Mukaber mount southern occupied Jerusalem was arrested on October 2015 after the IOF opened fires towards her car at Azza’im military checkpoint. Opening fire towards her car led to the explosion of gas cylinder in her car, setting fire in the car and her body. She sustained  burns, which consumed 60% of her body, lost 8 of her fingers, and suffered deformities in face and back.  She sentenced to 11 years imprisonment on charges of trying to carry out an attack and killing Israeli police.