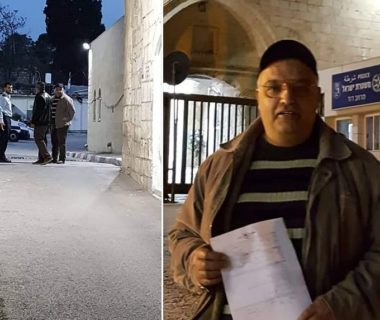 Media sources said the soldiers abducted Arafat Amro, the head of the Islamic Museum for Archelogy in Al-Aqsa Mosque, as he was leaving the holy site through Bab an-Nather and took him to an interrogation facility.

They added that Arafat was released in a 10.000 Shekels bail, after several hours of interrogation, and received an order barring him from Al-Aqsa Mosque and its compound where he works, for fifteen days.

Furthermore, the soldiers also abducted a young man from Jerusalem, who remained unidentified at the time of this report, after repeatedly assaulting him, causing various cuts and bruises.

Eyewitnesses said the soldiers struck the young man on the head of face, causing severe bleeding, and took him to the Police station in the Salahuddin Street.