Israel Seals off Sabastia for Passover 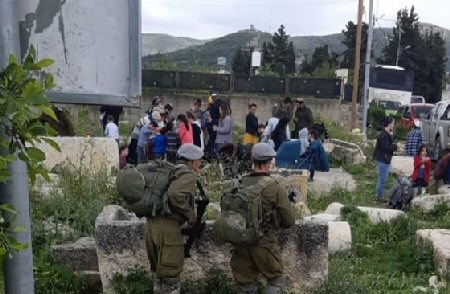 Hundreds of Israeli settlers stormed an archaeological site in Sabastia village, on Tuesday, in the northern occupied West Bank district of Nablus, on the occasion of the Jewish holiday of Passover.

Mayor of Sabastia, Muhammad Azem, told Ma’an News Agency that hundreds of Israeli settlers stormed the archaeological site, for a second day in a row, under the protection of heavily armed Israeli forces.

Azem said that Israeli forces set up military checkpoints at all three entrances to Sabastia archaeological site, west of the village, and prevented Palestinian residents from reaching the area.

Azem was informed that Israeli forces sealed off the village under the pretext of easing access for hundreds of Israeli settlers to the archaeological site, in order to hold celebrations for the Jewish holiday of Passover.

Sabastia is located some 12 kilometers outside the city of Nablus. It is the site of ancient ruins dating back 3,000 years, and was listed in the Oslo Accords among the archaeological sites of importance to Israel, and was designated a “national park.”