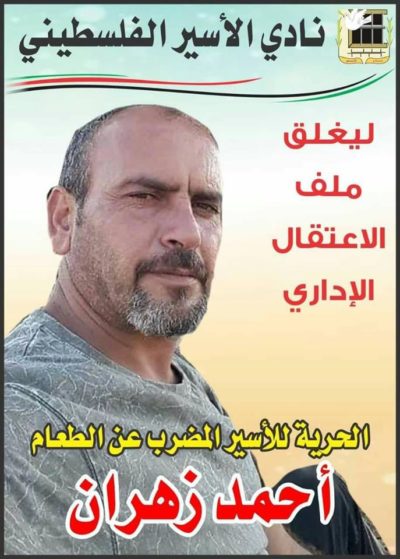 The Palestinian Commission of Detainees’ and Ex-Detainees Affairs has reported that detainee Ahmad Zahran, 42, has suspended the hunger strike, which lasted for 113 days, after reaching an agreement with the Israeli Prison Authority regarding his continued Administrative Detention without charges or trial.

Lawyer Jawad Bulus, the head of the Legal Unit of the Palestinian Commission of Detainees, issued a statement, Tuesday, declaring that Zahran has suspended the hunger strike after reaching an agreement transferring him for interrogation, instead of being held under the arbitrary Administrative Detention orders, without charges or trial.

Bulus stated that Zahran’s lawyers were part of the talks and the resulting agreement.

Bulus added that the detainee will await the results of the interrogation, especially since he has been held under repeatedly renewed Administrative Detention orders since Match of 2019.

The latest Administrative Detention order against him is scheduled to end on February 26th.

Bulus also said that the Israeli Military Court denied an appeal for his release, filed in his case on January 7th, citing the need for him to be interrogated.

He added that Israeli interrogators from the al-Maskobiyya detention and interrogation center in occupied Jerusalem, tried to question him on the 90th day of his hunger strike, in the Ramla Prison, but were unable to do so due to the serious deterioration in his health condition.

The Detainees’ Commission said Zahran was subjected to torture during his strike, and that he was moved to solitary confinement on the same day he started the hunger strike, in addition to being repeatedly transferred to various prisons and detention facilities, an issue that caused further health complications.

The Commission added that Zahran lost around 40 Kilograms (88 Pounds) of his bodyweight, in addition to being unable to walk or even stand, and his heartbeats reached in some cases to 35 per minute.

It is worth mentioning that Zahran is from Deir Abu Mashal town, near the central west Bank city of Ramallah, and was repeatedly abducted and imprisoned by Israel, spending more than 15 years behind bars.

In July of 2019, Zahran started a hunger strike which lasted for 39 days, and only ended it when he received “guarantees” that his Administrative Detention will be stopped, and he will be released, however, the Israeli Authorities unilaterally voided the agreement.