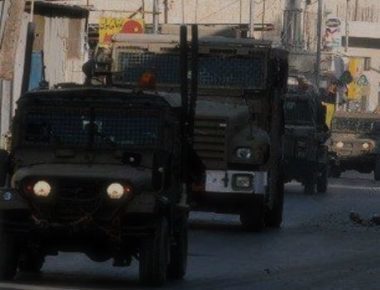 Israeli soldiers abducted, on Tuesday at dawn, nineteen Palestinians, including siblings, from several parts of the occupied West Bank, the Palestinian Prisoners‚Äô Society (PPS) has reported.

The PPS office in Jenin, in northern West Bank, said the soldiers invaded and ransacked many homes in several parts of the governorate, and abducted six Palestinians, identified as Mohammad Yousef Atatra, Jasser Eyad Atatra, Mo‚Äôtasem Fawwaz Issa, and his brother Mohammad, from ‚ÄėAneen village, in addition to Mahmoud Eid Hanaisha and Yasser Ahmad Abu ar-Rob, from Qabatia town.

Another Palestinian, identified as Bassam Abu Aisha, from Hebron, was abducted while on his way to welcome Hasan al-‚ÄėOweiwi, a political prisoner who was on his way back home after being released from an Israeli prison.

Also in Hebron, the soldiers invaded the home of Ali Salhab, a political prisoner who was taken prisoner eighteen years ago, and is scheduled to be released next week, and assaulted his mother, causing cuts and bruises.

In Tubas, in northeastern west Bank, the soldiers abducted Ahmad Anwar Daraghma, 27, from his home.

In occupied Jerusalem, the soldiers abducted Mohammad Mahmoud Rayyan, 26, from Beit Doggo town, in addition to Ismael Affana, who was taken prisoner minutes after his release from prison, after he was held captive for 18 years.