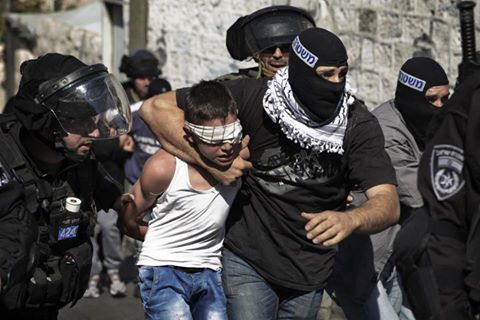 The Detainees Commission published, on Thursday, a report that includes affidavits by Palestinian detainees, including those of children, of torture and maltreatment by Israeli forces, during detention and interrogation at Ofer and Etzion military camps and detention centers.

Mohammad Dawood, 17, from Beit Duqqu, northwest of Jerusalem, said Israeli forces raided his work place, attacked him, threw him to the ground, beat him brutally before detaining him. He told the commission’s attorney Loai Okkeh that one of the soldiers tried to choke him while others pointed their gun at him and threatened to kill him if he did not confess of the charges against him.

Wa’ad Ramahi,17, from Jalazon refugee camp near Ramallah, reported being physically abused during his seizure after Israeli troops raided his home and ransacked it.

Karam Qatrawi from Jericho and Mohammad Shalaldeh from Hebron, aged 14, also pointed out that Israeli soldiers kicked them with their boots and beat them on head with their guns.

The commission said, according to WAFA, that those detainees are currently in Ofer Israeli prison, near Ramallah.

Additional cases of maltreatment and torture against minors and youth were documented in Etzion prison in the south of the West Bank.