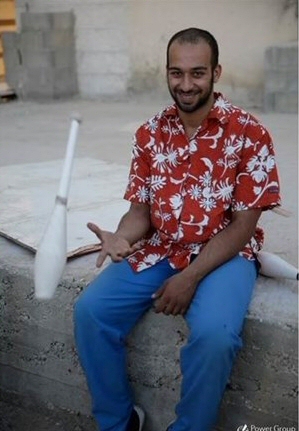 Israeli authorities, on Monday, decided to extend the administrative detention of a 23-year-old Palestinian circus performer, in spite of widespread outcry from activists and rights groups around the world demanding his release.

Israeli authorities ruled to extend Muhammad Faisal Abu Sakha’s remand for another six months, from June 13 until Dec. 12, in addition to the six months he has already served in administrative detention — Israel’s controversial policy of internment without trial or charge.

Ma’an News Agency reports that, according to prisoner’s rights group Addameer, a confirmation hearing for ruling is scheduled for June 15, during which a military judge may confirm, limit, or cancel the administrative detention order.

In a statement released by the Palestinian Circus School, where Abu Sakha worked, they said that neither they, nor Abu Sakha’s family or lawyer have received any reason or information regarding his detention — as is customary for administrative detainees that are held by Israel under undisclosed evidence for indefinitely renewable periods of three or six months.

Their statement referred to the Israeli occupation as “a system that knows no humanity,” whose only goal is “to break the spirit of an entire nation.”

“You (the Israeli occupation) only make our resistance stronger. And the resistance of the Palestinian Circus School has always been and will continue to be injecting hope, love, and happiness in the hearts and minds of all Palestinians and all people that cross our path worldwide.”

The school called for solidarity and support to raise awareness for Abu Sahka’s interment, and demanded an end to the “illegal abuse of administrative detention and freedom for our prisoners.”

Abu Sakha was working as a circus performer and teacher at the Palestinian Circus School in Birzeit in the central occupied West Bank district of Ramallah — where he specialized in working with children with learning difficulties.

He was apprehended at an Israeli checkpoint while travelling from his parents’ home to the school on Dec. 14, and was initially held in Megiddo prison in northern Israel before later being transferred to Ketziot prison in the Negev.

At the end of December, the circus performer was sentenced by an Israeli military court to six months in administrative detention and Israel dismissed a subsequent appeal by his lawyers against the sentence.

Amnesty International has condemned Israel’s military courts for suggesting Abu Sakha posed a “security threat,” while at the same time withholding all alleged evidence against him.

“Mohammad Faisal Abu Sakha and his lawyers were in the impossible position of trying to challenge his detention without having access to the necessary information for his defense,” the group said in a statement at in April.

Addameer has also condemned Israel for what it said “amounts to arbitrary detention” of Abu Sakha.

The Palestinian Circus School also rejected Israel’s claims that Abu Sakha was a security threat, saying his life was dedicated to the circus and “making children happy.”

According to Addameer, Abu Sakha has been a circus performer and trainer since 2011, taking part in performances across Europe and the US, as well as numerous tours in Palestine.

Abu Sakha had asked his family to thank all those campaigning on his behalf, but according to Amnesty International, he reiterated his greater concern for Palestinian children in Israeli custody, particularly those with mental and physical disabilities.

As of May this year, Israel was holding 7,000 Palestinian political detainees, including 414 children and 715 administrative detainees, according to Addameer.