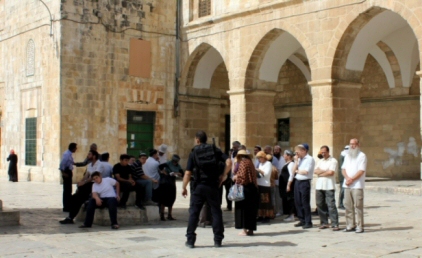 The Israeli tourism ministry has published a map of the occupied Old City of al-Quds (Jerusalem), which omits significant Muslim and Christian holy sites, as well as entire neighborhoods, from the area.

The so-called “Old City” map, which is distributed free of charge at tourist information centers across the city, does not label the venerated 14-hectare compound that comprises al-Aqsa Mosque — Islam’s third holiest site — and the Dome of the Rock, as “al-Haram al-Sharif,” and simply refers to it by its Jewish name of the Temple Mount, Al Jazeera reported.

Moreover, according to Press TV/Al Ray, the map makes no reference to the Church of St. Anne, which is a Roman Catholic church located near the Lions’ Gate and churches of the Flagellation and Condemnation in East al-Quds.

The Lutheran Church of the Redeemer, the second Protestant church in Quds, is also shown on the map with a tiny and hard-to-find name.

The map, however, highlights dozens of sites whose historical importance is disputed, and a large number of them are indeed illegal settlements constructed in the Muslim and Christian quarters of the Old City of al-Quds.

Among 57 numbered sites, almost half are buildings occupied by illegal settlers in East Jerusalem and are largely unknown to licensed tour guides.

One such tour guide, requesting anonymity, said the map favors Jewish sites regardless of their touristic value and appears religiously flawed.

“When I saw it, I thought it was a map for only Jewish tour groups. The narrative it shows is quite exclusive to one religious group,” the tour guide said.

Aziz Abu Sarah, a resident of al-Quds, said, “The St. Anne’s Church, which I think is one of the most amazing places, is not on the map. There are many Christians coming to Jerusalem, and they are going to get a map that doesn’t identify their holy sites. It’s not a smart decision.”

He further suggested that the inclusion of certain sites within the boundaries of the Old City of al-Quds is aimed at promoting a one-sided Jewish representation of East Jerusalem and ignoring its Christian and Muslim identities.

“Politically speaking, it adds sites that are controversial, like the settlements in East Jerusalem, and I think that makes it political and one-sided,” Abu Sarah said.

“There are a bunch of sites that are not only historically unimportant, but that are run by settlers,” said Betty Herschman, the director of international relations at Ir Amim, an Israeli human rights NGO that gives tours of East al-Quds to diplomats and others.

She added: “That is to the detriment of historically relevant Christian and Muslim sites, which you would think would be far more prioritized on a map of the Old City, the hub of the three major monotheistic religions.”

“This map, in addition to erasing important Muslim and Christian holy sites in the Old City, completely erases entire neighborhoods around the historic basin, supplanting them not only with Hebrew names but with the names of settlements,” Herschman argued.

She stressed that the settlements, for example Bet Orot, are built by radical and illegal settlers within the heart of Palestinian neighborhoods.

“The map is legitimizing private settlement around the historic basin,” Herschman said.

More than half a million Israelis live in over 230 illegal settlements built since the 1967 Israeli occupation of Palestinian territories in the West Bank and East al-Quds.