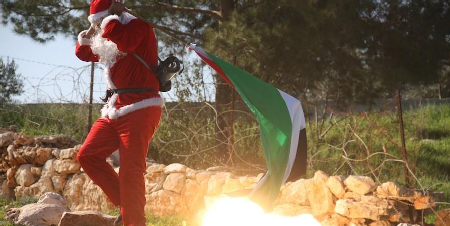 When Palestinian Minister of Sports and Youth Jabril Rajoub called Palestinian Christians ‘the Merry Christmas people’ he fueled the problematic debate of who is truly Palestinian.

Usually I do not engage in discussions that challenge my sense of national or social dignity.

To more frank: debates about who the “real” Palestinians or Arabs are disgust me.

Why? I feel disgust with such questions because they all maintain an implicit assumption that some Palestinians are not truly a part of the Palestinian people. This dangerous notion is reflective of a distortion of Palestinian national identity wherein religious or sectarian affiliations take precedence. Consequently, in my opinion, all efforts to prop up Christian Palestinian Arabs as loyal Palestinians Arabs that “belong” are an insult to every citizen in Palestine and the Arab World.

Moreover, if a group’s religion is the deciding factor of its identity and place in society, then shouldn’t this debate equally apply to Palestinian Muslims, Arab Muslims, and all other religions or social structures too? Why is there always a question mark regarding the affiliation of the Palestinian Christians or Arab Christians to their nationality, but not Palestinian or Arab Muslims?

What inspired me to write this article was the commotion set off in Palestine by the phrase “the Merry Christmas people.” Palestinian Minister of Youth and Sports, Jibreel Rajoub, coined the phrase to refer to Palestinian Christians on September 6th during an interview on Egyptian television.

In my view, it is problematic that the characterization of Palestinian Christians as “the Merry Christmas people” was uttered by an official Palestinian personality. It seems that Rajoub did not realize that portrayals of social groups, especially by a prominent figure, create discourse and our lived reality. This is exactly why everyone who heard this expression was offended and angry.

In this framework, it is obvious that language creates meaning.

The expression “Merry Christmas people” was also utterly negative because it connected an organic part of the Palestinian people to a foreign expression, suggesting their identity is (Western) Christian only. The expression “merry Christmas people” elicits images with negative connotations: an insular group, defined by its religion, or a foreign group with a different language and culture than the rest of Palestinian society. Indeed, Rajoub didn’t even bother translating the holiday greeting into Arabic: Eid milad Majeed.

The Archbishop of Sebastia from the Greek Orthodox Patriarchate of Jerusalem, Atallah Hanna, responded to Rajoub’s comment, emphasizing Palestinian Christians’ indigeneity to Palestine:

We condemn, refuse [and] denounce this expression, which does not offend Christian Palestinians, but the entire Palestinian people… Christian Palestinians are not ‘the Merry Christmas People,’ but children of the first Christian church here in Palestine. We are proud of our affiliation to oriental Christianity… [We] are not people imported from the West… [We] were not brought from somewhere else before coming here.”

In conclusion, Palestinian politicians, scholars, journalists and others must pay attention: language that seems casual or even jovial can harbor explanatory power that creates dangerous social realities.

Let me be clear: it is not my intention in the article to defend Christian Palestinians, for the reasons detailed above. After all, who am I to certify national or Arab affiliations? By unpacking Rajoub’s problematic statement, I am defending my identity, affiliations, nationalism and sense of Arab belonging – in all of their facets. That is all.

Nasser is a Palestinian writer, analyst and the co-director of the Alternative Information Center (AIC).