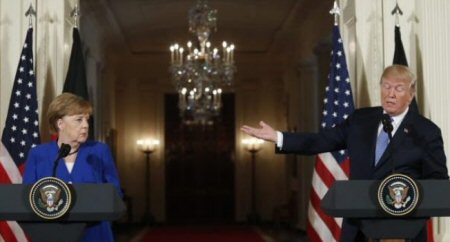 U.S. President Donald Trump said, Friday, that he still “may go” to the ceremony in Jerusalem, next month, to celebrate the opening of the American embassy in the city, and bragged about saving money by rejecting an initial proposal to devote $1 billion for the construction of a new embassy, and replacing it with a significantly more moderate plan costing close to $400,000, instead.

Trump added, during a joint press conference with German Chancellor Angela Merkel, that U.S. Ambassador to Israel David Friedman pitched a plan thereafter that would cost just $150,000, and that the two eventually “settled” on a plan that will cost American taxpayers between $300,000 and $400,000.

The current American plan, according to the PNN, is to announce the existing consular building in southern Jerusalem as the embassy’s location, and move only a small number of offices from the embassy in Tel Aviv to that building, as an initial step.

The larger step of moving the entire embassy, to a new location in Jerusalem, would cost more than the sum Trump mentioned, and would also take more time.

Last week, it was reported that the American delegation to the upcoming ceremony in Jerusalem will be led by Trump’s son-in-law and senior adviser Jared Kushner and his wife Ivanka, as well as by Secretary of the Treasury Steve Mnuchin. In addition, Trump’s newly appointed Secretary of State Mike Pompeo will visit Israel, as well as Jordan and Saudi Arabia, on his first foreign trip on the job this weekend.