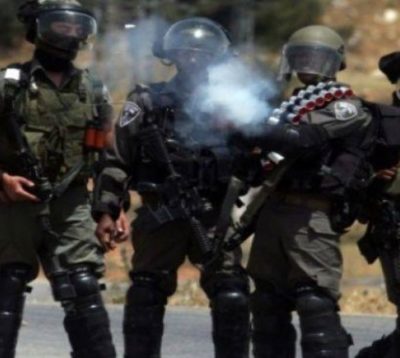 Medical sources have reported that dozens of Palestinians suffered the severe effects of teargas inhalation, on Tuesday evening, after Israeli soldiers invaded Beit Ummar town, north of the southern West Bank city of Hebron, and fired gas bombs at homes and a mosque.

Media activist Mohmmad Awad said several army vehicles invaded the ath-Thaher area in the town, near the illegal Karmie Tzur colony, which was built on private Palestinian lands, and fired a barrage of gas bombs at homes and the local mosque.

There were no protests in the town when the soldiers invaded it and fired the gas bombs, however, the soldiers repeatedly fire gas bombs and concussion grenades into areas they invade to force the Palestinian off the streets.

Medical sources said dozens of Palestinians suffered the severe effects of teargas inhalation, including those who were praying in the local Somoud Mosque, and received the needed treatment.

The soldiers also stopped many cars and interrogated the Palestinians while inspecting their ID card; the army later withdrew from the town, and there were no reports of arrests.