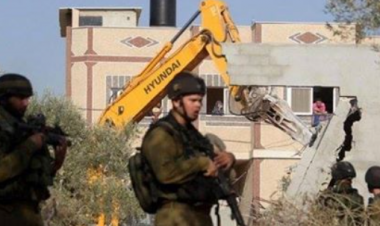 Israeli authorities demolished a Palestinian home, in the al-Tur neighborhood of occupied East Jerusalem, on Wednesday.

Local witnesses told Ma’an News Agency that Israeli authorities, along with Israeli forces raided the al-Tur neighborhood and demolished a house, under the pretext of being built without the difficult-to-obtain Israeli permit.

The house was newly built and furnished to live in; the apartment was located on the last floor of a residential apartment building, which consisted of a total of five floors.

Nearly all Palestinian applications for building permits in Area C are denied by the Israeli authorities, forcing communities to build illegally.

Meanwhile, the estimated 550,000 Jewish Israeli settlers in the occupied Palestinian territory are more easily given building permits and allowed to expand their homes and properties, despite living in settlements that violate international law.